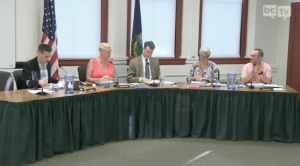 The Brattleboro Selectboard held their only meeting of July. Despite objections from many landlords, the board approved a new rental housing inspection program, and despite numerous statements of support they put off deciding on how best to deal with issues of sustainability.