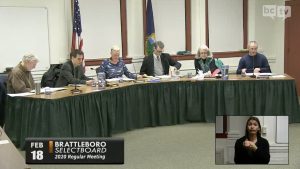 The Brattleboro Selectboard heard about planning for one or more possible communications districts at their regular Tuesday meeting. Fiber might be coming to southern Vermont, depending on the results of a new survey everyone is encouraged to fill out and how applicable those results are to a business plan.

The Hazard Mitigation Plan was reviewed, liquor violators questioned, and reports given on a recent town governing day at the state level.