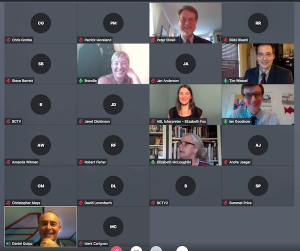 The Brattleboro Selectboard had a long discussion about their long discussion last week about face coverings. Is it too strict? Not stick enough? What about the children? They then moved on to a discussion of raising water and sewer rates to help pay for the new water filtration plant. Is 6% a year too much? Is 2% too low?

The final discussion was of the parking system, and how with no income and continued expenses, the budget doesn’t look so good. Should the Parking Fund remain an enterprise fund or be rolled back into the General Fund? And who has the best ceiling?