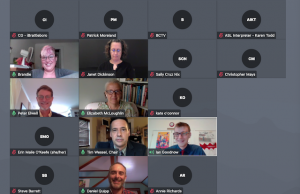 Handy Stations were the primary topic of a special virtual meeting of the Brattleboro Selectboard. The board approved spending $3,600 on three artistic devices to help people sanitize their hands downtown. If it works out, they may spend even more on keeping people safe.

It was admitted that some hand sanitizer taped to the wall might be significantly less expensive, but a motion-sensing, artist -decorated, musical hand sanitizing station to be adopted and maintained by businesses was the preferred idea. There was also an interesting discussion about the Civil War monument.