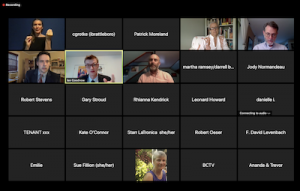 The Brattleboro Selectboard discussed affordable housing at length Tuesday evening. A new affordable housing project downtown on Flat Street, a town-wide zoning change to create more rentable units, and a discussion of an ordinance to limit what landlords can collect up front from tenants all indicated difficulties for the 60% of residents who rent in Brattleboro.

The DPW also shared a bit of the spotlight, with road grants and a new mower attachment.