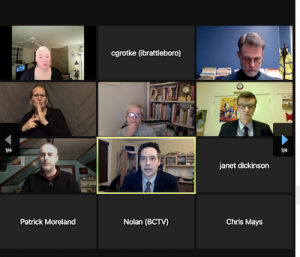 The Brattleboro Selectboard accepted the report of the Community Safety Review Committee with a unanimous 5-0 vote and sent the document to Town staff. Staff will annotate and organize the recommendations for the board, evaluating the legality and logistics for each recommendation.

The board also heard about plans for a new water treatment plant at a new estimated cost of $12.5 million. They approved of a charter change amendment to be put to voters on March 2. And they recommend to Town meeting representatives that the police training budget remain at $27,000 rather than be increased to $40,000.