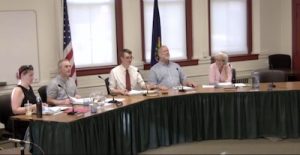 The Brattleboro Selectboard discussed their own powers of resolution and whether they could do anything at all on the issue of abortion rights. They decided their lawyer-approved resolution needed more teeth, but also no chance of disruption to the State, and maybe funding, but not any special funding, and maybe something else as yet undetermined.  They’ll take up the urgent issue again at their next meeting.

There were grave concerns about data collection and not sharing any data with bounty hunters. A bit later, board members were impressed by the ambulance data being collected locally and asked for even more EMS data from the Fire Department.

It was a gloomy and restless mood amongst many members of the public. Many expressed feelings of impending doom. Two asked for a special session of Representative Town Meeting.