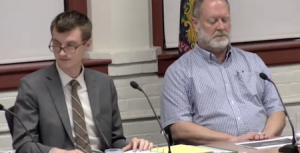 The Brattleboro Selectboard continued their careful consideration of abortion rights. They heard testimony about the possible town resolution from the Town Lawyer and a State Representative in addition to members of the public. In the end it was decided to do nothing, the safest option for now.

Brattleboro will be getting energy saving incentives and rebates as part of a special program with Efficiency Vermont. They especially want to hear from renters!