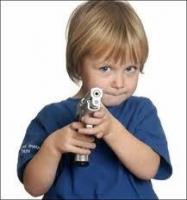 Guns for Tots: Time to arm the Children?

It is absurd to think that we need to have armed guards in schools. A more pragmatic approach is to arm the children. From kindergarten to college, everyone is armed, from the tiny little cute derringers in the guise of a cell phone, to the backpack portable semi-automatic rifles, or the gym bag size to hold a few Berettas.

When, we Americans think of our proud tradition of gun ownership we recall Daniel Boone as a child killing a bear with a flintlock or Davie Crocket as a lad killing a mountain lion. Tupac Shakur who wasn’t afraid to face life with a gun in his hand, “No longer living in fear, my pistol close in hand.” If our heroic ancestors can kill these ferocious beasts, why can’t any child worth his salt — lock and load?

The various ludicrous notions of having an armed guard patrolling is not heartening. Would it be the same refugees from the TSA? Those overweight mental midgets who can barely keep their pants up? Kids are much smarter. Ever since they were born, they’ve been watching training movies on killing and mass slaughter. Their neural networks have been programmed to work with the most sophisticated of video games that portray people being killed and maimed, and far more people in a minute than Davie Crocket could have ever dreamed of.

The NRA has many nearly enlightened programs to teach youngsters how to safely shoot. When a killer comes stalking into school he doesn’t know which kid will fire first. The NRA’s programs teach children how to safely shoot and kill, without the collateral damage of too many other children being killed. After all, wouldn’t you rather know that your child was inadvertently killed while protecting his school, than being killed by a stranger?

The success of child soldiers was evidenced in Sierra Leone. These little kids, as young as nine, were toting AK 47s, and though they got bounced around with the recoil they were the terror of their country. Nobody messed with these little assassins. Granted, it took a while for them to actually focus and kill, perhaps that is why the also gave them amphetamines. Or in Somali, another oasis of enlightened gun use, everyone is armed from little Mohammed to grandma. Who needs a stable working government when everyone is locked and loaded. Every child for themselves.

In Aurora, when that killer walked into the darkened movie theater, imagine if everyone had been armed? Just like in the movies everyone would slip on their night vision goggles, take out their hand guns, their backpack sized M16’s, and for safety sake a few stun grenades. Though there might have been some collateral damage, some children and others who might get in the line of fire, just the thought of this movie theater turning into a free-fire zone would scare the bejesus out of any wannabe mass killer.

This could inspire a new social decorum in schools.

“Hey Johnny, is this your first day in kindergarten? My, my that is a very handsome looking Smith Wesson, and it is so cute with the sponge bob stickers.”

“Thanks teacher! I have two more, one strapped to my leg, and the other one in my lunch box. My dad and mom say, “You can never be too under-armed when you go to school. I also brought an extra Ruger 9mm to share. My Dad says it’s important to share your guns with the good kids.”

With all the Ritalin fueled energy and young hormones, everyone is ready at a moment’s notice. Every kid in America has seen every imaginable mass murder and killings, from video games, to action adventure movies like Batman, to your ordinary television at night where at least a few people get killed every hour, and they’re ready to take it to the next level – every child with a weapon.

Imagine a nation and schools where everyone, from tots to teens is armed, locked and loaded.