A recent LTE from Putney resident Elan Moses contained too much misinformation to be useful (Governor’s misguided views on gun control).

While his point that Vermont’s lack of gun legislation opens the door to many abuses, his suggestions for curing this were naïve and disingenuous.

“It does not mean we do not make efforts to make it harder to acquire semi-automatic weapons here in
Vermont”. I don’t think he has any idea what a Semi-Automatic firearm really is. (Unfortunately, this attitude is widespread in America. The very word “semi-automatic” has a high scare factor despite the fact that the
overwhelming majority of hunting rifles used in the USA today are semi-automatic).

From Wikipedia: A semi-automatic, or self-loading, firearm is a weapon that performs all steps necessary to prepare the weapon to fire again after firing—assuming cartridges remain in the weapon’s feed device or magazine. Typically, this includes extracting and ejecting the spent cartridge case from the weapon’s firing chamber, re-cocking the firing mechanism, and loading a new cartridge into the firing chamber. Although automatic weapons and selective fire firearms do the same tasks, semi-automatic firearms do not automatically fire an additional round until the trigger is released and re-pressed by the person firing the weapon.

A double-action revolver also requires only a trigger pull for each round that is fired but is not considered semi-automatic since the manual action of pulling the trigger is what advances the cylinder, not the energy of the preceding shot.

All basic firearm actions require the action to be cycled manually before the first shot. To fire ten rounds from a semi-automatic firearm the trigger would need to be pulled ten times (once for each round fired). For other forms, the weapon’s mechanism would require cycling manually prior to firing the next round. An automatic or a selective fire weapon set to fire automatically would be able to fire continuously as long as the trigger is held until the magazine or feed device runs out of ammunition.

In 1906, Remington Arms introduced the “Remington Auto-loading Repeating Rifle”. Remington advertised this rifle, renamed the “Model 8” in 1911, as a sporting rifle.. The rifle was offered in .25, .30, .32, and .35 caliber models, and gained popularity among civilians as a hunting rifle.

The usage of the term automatic may vary according to context. Gun specialists point out that the word automatic is sometimes misunderstood to mean fully automatic fire when used to refer to a self-loading, semi-automatic firearm not capable of fully automatic fire. In this case, automatic
refers to the loading mechanism, not the firing capability.

He goes on to say: “I am sure you know that the truth is these are not hunting rifles we are talking about”. As I stated above, the overwhelming majority of hunting rifles used in the USA today are semi-automatic. That’s not the problem.

“I hope you would agree in principle that there are certain weapons that should not be readily available, or should any citizen be able to purchase a surface to air missile launcher such as are used in many guerrilla armies?” I don’t think many people would disagree with that. Fortunately, there are Federal laws on the books dealing fully with these issues. And the penalties are severe.

“I am all for the second amendment, and I think every citizen should be free to own as many muskets as
they want.” Huh?

A musket is a muzzle-loaded, smoothbore firearm, fired from the shoulder, introduced by the French in the 16th century: the predecessor of the modern rifle. (Cf: Musketeer).They are still used for hunting in the US by “black powder” aficionados. They are not very accurate, nor are they efficient for hunting. Shoot at a deer and miss, and ask the deer to wait around for you to get out your powder horn and tamping rod! This inconvenience is offset in many states by offering special black powder seasons, affording the hunter the opportunity to bag an additional deer.

“why you think it should continue to be legal to purchase a machine gun in Vermont”. Technically, this may be true, but Federal law males this nearly impossible.

In United States gun law, machine gun is a technical term for any fully automatic firearm, and also for any component or part that will modify an existing firearm such that it functions as a fully automatic firearm. A Machine Gun is defined (in part) by The National Firearms Act of 1934, 26 U.S.C. § 5845(b) as “… any weapon which shoots … automatically more than one shot, without manual reloading, by a single
function of the trigger.

Congress passed the National Firearms Act (the NFA) in 1934 in response to Prohibition Era violence Congress saw as frequently involving machine guns, short-barreled shotguns and rifles, and firearms silencers and mufflers. Think Al Capone and the use of Tommy Guns at the St. Valentine’s Day Massacre. Among other things, the federal law:

1. requires all machine guns, except antique firearms, not in the U.S. government’s possession to be registered with the Bureau of Alcohol, Tobacco, Firearms and Explosives (ATF);

2. bars private individuals from transferring or acquiring machine guns except those lawfully possessed and registered before May 19, 1986;

3. requires anyone transferring or manufacturing machine guns to get prior ATF approval and register the firearms;

4. with very limited exceptions, imposes a $200 excise tax whenever a machine gun is transferred;

5. bars interstate transport of machine guns without ATF approval; and

6. imposes harsh penalties for machine gun violations, including imprisonment of up to 10 years, a fine of up to $250,000, or both for possessing an unregistered machine gun.

The lawful transfer of a machine gun generally requires (1) filing a transfer application with ATF, (2) paying a transfer tax, (3) getting ATF approval, and (4) registering the firearm in the transferee’s name. Transferees must pass an extensive criminal background investigation and meet the criteria for possessing firearms under state and federal law.

Now, let’s get to the nitty-gritty. The problem is not hunting rifles and semi-automatic weapons, it is weapons having significantly enhanced capabilities that make it easy to kill large numbers. These are commonly referred to as “Assault Rifles”, but that is a misnomer.

Genuine “assault rifles” are a compromise between the size and weight of a pistol-caliber submachine gun and a full size traditional automatic rifle by firing intermediate cartridges, and allowing semi-automatic, burst or
full-automatic fire options (selective fire), often with two or more of these available on the rifle at once. 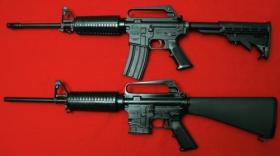 But there are “imitation” assault weapons that look like, feel like, smell like and even taste like, but don’t function like the real thing. These are glorified “toys” designed for selling, not using. They are not well suited for hunting or target practice, but can be extremely dangerous.

In certain states, like California, weapons that “cosmetically” resemble true assault rifles, but are only semi-automatic (autoloading), are categorized as “assault weapons” and possession by civilians is generally illegal. Supporters of gun rights generally consider this application of the phrase “assault weapon” to be a misnomer. What makes many of these weapons extremely dangerous is their capability of accepting large capacity magazines. You don’t need a hundred round magazine for self-defense or to bag a deer.

It is illegal while hunting in Vermont to use, carry, or have in your possession a machine gun of any kind or description or an autoloading rifle with a magazine capacity of over 6 cartridges. (http://www.eregulations.com/vermont/general-hunting-information/

Most other states have similar regulations (In New York, the number in the magazine is 5).

So, the task is to craft legislation that permits hunting weapons without banning most guns simply because they’re semi-automatic, or because they look like real assault weapons, and at the same time limit magazines to a sensible number of cartridges. This shouldn’t be hard to do.

“No free man shall ever be debarred the use of arms. The strongest reason for the people to retain the right to keep and bear arms is, as a last resort, to protect themselves against tyranny in government” — Thomas Jefferson, 1 Thomas Jefferson Papers, 334

Noble words, but unrealistic in light of today’s technology. Bottom line: When the Gubmint seriously
wants to take your guns away, they will!

The first known ancestor of multi-shot weapons was created by James Puckle, a London lawyer, who patented what he called “The Puckle Gun” on May 15, 1718. It was a design for a 1 in. (25.4 mm) caliber, flintlock
revolver cannon able to fire 9 rounds before reloading, intended for use on ships. According to Puckle, it was able to fire round bullets at Christians and square bullets at Turks. (Isn’t that precious?)