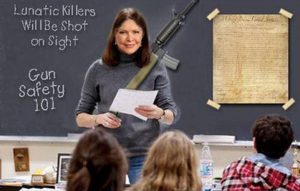 At least one gunman opened fire at a Houston-area high school Friday, killing eight to 10 people, most of them students, authorities said. It was the nation’s deadliest such attack since the massacre in Florida that gave rise to a campaign by teens for gun control.

This never would have happened if the teachers were all packing.