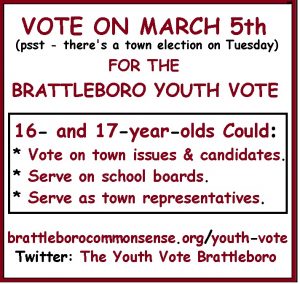 Hi. My name is Mark Tully, a resident of Brattleboro. I’ve been helping out the youth leadership of the Brattleboro Youth Vote campaign – which comes to a head in this Tuesday’s town elections with a ballot measure (Article II) that partially enfranchises youth aged 16 and 17. I’ve worked with youth leadership around the country in various political and artistic projects for over 25 years, and continue to do since moving here four years ago.

While monitoring opinions in the local press, and talking to residents during petitioning and community events, there are some common objections that arise. These objections are not unique to Brattleboro – we’re in touch with 12 local campaigns, 7 state campaigns, a Canadian campaign, and in solidarity with national efforts as well. These objections clash with my experiences working with youth, and also my experiences with “adults”. There are many positive-facing benefits to enfranchising youth, but here I will address these common objections.

One particularly stupefying objection is the assertion that teenagers will just vote the way their parents do.  Which makes me double-check what planet I’m on, because I have rarely if ever met (or been) a teenager that was all about agreeing with their parents, even if they share the same values. That’s not how generations work. The reality is that by high school, teenagers are well into the period of discovering their own opinions, and by 16 are very much their own person. Pedagogically, if you’re going to have any fundamental (hopefully positive) impact on who a student becomes as an adult, middle school is really your last chance.

That’s an apt segue into the maturity question. Our society has a range of age restrictions for certain privileges, liberties, and consequences. The current ones for age 16 include: driving; working; the choice to end institutional education; being criminally tried and sentenced as adults (in all states at least 17, and some at 16); and becoming an emancipated minor no longer bound by the decisions of their parents. This is a self-evident list of acknowledgements that 16-year-olds are mature enough to significantly control their own fate. Research studies affirm that 16-year-olds have fully developed “cold cognition”, which allows for mastery of “situations that permit unhurried decision-making and consultation with others” (New Scientist magazine, “Let Science Determine the Voting Age”, October 2014).

I’m hardly what one would call an Originalist about American Revolutionary values, but the complaint that founded the American concept of democracy was “no taxation without representation”. Another common objection to youth enfranchisement is that youth do not pay taxes, and so shouldn’t be able to affect how taxes are spent. Let’s revisit the above list. Drivers pay gas taxes and government licensing and registration fees, and workers pay all local, state and federal taxes that are deducted from paychecks. And yet those under the age of 18 have no say in how their money is allocated, or in which politicians determine that allocation. Old King George would be pleased that the basic American experiment remains hypocritically incomplete.

Onward to the objections that teenagers are politically uninformed, and would be easily influenced by sensationalist politics and vote based on spurious criteria. As our enfranchised citizenry considers an ideal presidential election to be between Trump and Oprah. A similarly false dichotomy between minors and adults in the assertion that teenagers are apolitical. Our experience in this campaign trying to engage the adult public was rather dominated by sneers of distaste at the very mention of politics, and people with strong opinions that were nonetheless proud non-voters. In towns where teenagers have been enfranchised, under-18 voter turnout FAR exceeds that of over-18. And worth a mention here, some of the fiercest grassroots political analysis and leadership in the nation right now is coming from teenaged minors.

Lastly I’ll point out what should be the obvious counter to the assertion that youth do not have a sufficient stake in budget and policy decisions to justify enfranchisement. There are certain issues, such as environmental degradation, public education policy, long-term government debt, corporal punishment laws, and poverty, that impact youth more than anyone else. Teenagers also tend to have stronger roots in their community, often having lived in the same area for many years and steeped in connections to their school, family and friends, and other community groups, They are likely staying in the community for at least a couple of years before the age of 18, when many perhaps vote right before leaving the community, or vote in communities they have only just arrived in. Voting at an earlier age activates and cultivates an investment in one’s community that makes one more likely to stick around, rather than the experience of mature yet disempowered existence that cultivates resentment and flight response.

So do the truly mature thing on Tuesday, and vote Yes on Article II. You only have your unfounded prejudices to lose, and a more vibrant political culture to gain.