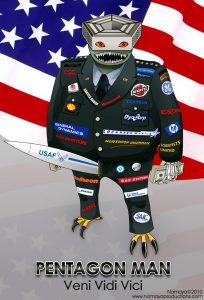 In every sacred valley, I want the sound of the F-35 to shake the foundations of our NIMBY bias, 24/7, 365 days of the year. Like Paul Revere riding through the night to alarm his fellow patriots, let this plane roar! Though my comrades of the Veterans for Peace and many people of conscience oppose the F 35’s; however, I believe this monstrous boondoggle dinosaur should be so prominently loud in Vermont and the USA that we all need to consciously consider the impact of these planes and the US war machine around the globe.

The words fiasco, disaster, boondoggle, military-industrial corporate heist, egregious corruption, personification of vulture capitalism, and so on, are just a few tame appellations that have been ascribed to the F-35 and its abject failure. The plane costs between $150 and $200 million per plane (not including interest). The total US Military budget is estimated between $1.5 and $2 trillion. The Project on Government oversight gave their evaluation on the F-35 and, in sum, the plane is often not operational. “What we learned about the operational test fleet at California’s Edwards Air Force Base is even more troubling. It is failing dismally to meet the required 80 percent fully mission capable rate—it has averaged only 11 percent since December 2018. And most recently, it received a rating of only 8.7 percent. A plane that can’t function puts our troops in harm’s way.”

A Pentagon study concluded, “A $1 trillion maintenance cost for the entire fleet of F-35s over its lifespan, not accounting for inflation. That $1 trillion will be spent on the entire F-35 includes both the nearly $400 billion being spent on the development and production of the next generation fighter jet and the expected costs of operating the fleet of warplanes.” Yet, the numbers for the total cost of the plane shift faster than a conman’s fingers for a shell game on 42nd street. In truth, no one really (not even the Pentagon nor experts) know the actual costs, we only have best estimates.

The U.S.A is in the business of war and making war machines. Though we are 4.2% of the world population, we spend over 51% of total global military sales. We send drones and drop hundreds of tons of bombs on Yemen, Pakistan, Afghanistan, and maintain military bases in more than 150 countries around the world. The people in those countries often speak of the incessant buzzing of drones 24/7, 365 days of the year. The drones are vultures of death to ensure the ongoing profits of the military industrial mafia. In the meantime, for those of us who are fortunate to have a home, we are safe and secure and do not hear the sounds of warplanes or drones. We are immune to war, unless one of our sons or daughters comes home in a body bag. Nevertheless, we, or our surrogates like Saudi Arabia or Israel, are only too happy to send drones, rockets, and drop bombs on civilian targets. When civilians are killed, we call them terrorists. When children in those countries are killed, they are called terrorists in training.

It is time for war to be an equal opportunity offender. If drones and planes, paid for by the U.S. taxpayers, can fly around the world and deliver death and destruction to civilians, then why shouldn’t Vermonters and all U.S. Americans be afforded the same opportunity for noise and destruction? When war is an equal opportunity offender that impacts every person, only then can we fully fathom the true cost of war. Otherwise, we sit safely on our couches waving the US flag cheering on the troglodyte POTUS and the war machine. Are we like Cheney, Trump, G.W. Bush, Biden and the other chicken hawks who have called for war, but who dodged the Vietnam draft?

It is time to bring the F-35’s with all of its pollution, wastefulness, and bone numbing thundering across the skies home to Vermont. When we neither see nor feel the consequence of war, then we can wage war with impunity. Though the USA has military bases in over 150 countries around the world, we rarely see the impact here at home. We do not feel the bombs dropping on our homes. Has $1.5 trillion annual military budget contributed to the epidemic of homelessness, the lack of healthcare for more than 40% of Americans, the 25% of elderly who live in poverty, and an infant mortality rate at 33rd in the world? Does the U.S.A. have to sacrifice the well-being of its citizens to have the worlds’ greatest war machine?

When we bring the F-35 right here to Vermont, the epicenter of political correctness, and make it front and center in every conversation about the cost and consequence of war and militarism in society– it may even give the most ardent supporter of POTUS something to consider. Ain’t nothing more damn annoying than an F-35 rumbling and shaking the foundations of your house and spilling your beer while you’re watching Sunday football!

Fellow Vermonters (liberals, fascists, and everyone in between), let us bring the F-35 to our beautiful green mountains. We are a nation of war. For two hundred years, we have been the war machine extraordinaire. We make the Roman Empire and their legions of marauders look like sissies! Let all the noise of the F-35’s scream across Vermont! War is not some abstract notion of over there, but when war is the present reality 24/7, 365 days of the year and affects the quality of our lives, threatens to knock us off our sofas, we may consider that maybe war ain’t such a great idea. We may even also reconsider not only the trillion dollars wasted on the F-35, but also the annual $1.5 trillion dollar plus military budget. As General Eisenhower reminded us, “Every gun that is made, every warship launched, every rocket fired signifies, in the final sense, is a theft from those who hunger and are not fed, those who are cold and are not clothed…. Under the cloud of threatening war, it is humanity hanging from a cross of iron.”
Bring this thundering, boondoggle monstrosity of a plane to Vermont. Let the deafening roar shake every sacred valley and every home. Let us deeply consider the true cost and consequence of the F-35 here in Vermont and the US military budget.

Namaya is a member of Veterans for Peace and a USN Vietnam era Veteran who writes from Blue Heron Pond, VT.