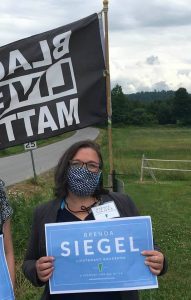 I’m sharing why I am supporting Brenda Siegel to become our next Lieutenant Governor of Vermont: a decision I came to after researching Brenda’s stand on policies and noting that she embraces similar progressive values as my own.  What I believe distinguishes her from other candidates are her valuable insight and wisdom: qualifications gained through her advocacy background, business ownership and life experiences as a single Mom.

If we want a responsive state government and a break from the continuation of our current problems (because we didn’t effectively fix them), we must select candidates we can trust, who are adept at all of the above.  We want Brenda fighting for us in Montpelier!

As someone who had experienced medical harm and now advocates for fellow patients, I know we need a candidate with Brenda’s energy, leadership skills and moral compass as our next Lieutenant Governor to help guide us through real change.  Please read more on Brenda’s progressive values (see www.brendaforvermont.com and her Facebook page), and join me voting this August 11th to help elect Brenda Siegel as Vermont’s next Lt. Governor.   Stay safe and take good care.