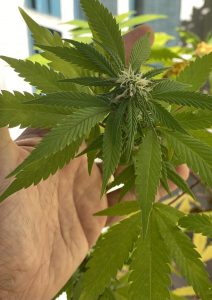 As some may already know, I was appointed by the Vermont Senate to represent municipalities’ interests on the Cannabis Control Board’s Advisory Committee. While I wouldn’t claim to have the level of “expertise in municipal issues” that some other longer-serving Selectboard members in Vermont might have, I feel that my past work advocating for the rights of towns, cities and villages does give me some insights, and I’m doing my best to represent local taxpayers during many rapid deliberations over the shape of the upcoming retail cannabis marketplace.

I want to make very clear my opposition to a hastily made decision by one of our sub-committees, the Market Structure, Licensing, Taxes and Fees Sub-Committee, without reasonable input taken and considered from the Vermont municipalities. This committee has evidently already voted to “cap” what local town clerks can charge for a cannabis license to $100 yearly, a laughable amount considering the fact that the state portion of yearly fees being currently considered are between $5,000 and $10,000.

This flies in the face of common sense when it comes to building a partnership between our state cannabis agencies and local government because of the workload this will produce for the people who will be issuing licenses and dealing with the effects of this new marketplace locally. If this recommendation goes forward as is, any sense of trust from local governments that the state is looking after their interests will, pun irresistible, go up in smoke.

Keep in mind that when the Vermont League of Cities and Towns along with multiple municipalities pleaded with the Vermont Legislature to grant a small percentage of the 20 % taxation of cannabis to any town willing to host, they were denied in the final drafting, and I was personally told that towns would be “made more whole in the fee structure that’s coming.” And what do we currently have? A proposal for “up to” $100 a year for local support, with no local share of the very heavy state 20 percent tax on all cannabis sales.

Setting aside that any Vermont Town Clerk will have plenty of paperwork and back-and-forth with any initial applicant and yearly renewals, and also setting aside the workload of volunteer Selectboards who will be burdened with hearing complaints and commentary, and all of the additional workload of things like zoning rules and fire safety, we must also consider the more intangible local costs.

Who will respond when a new user of cannabis edibles eats too many cannabis gummies and decides to walk naked down Main Street? Local police will, in places that have them. Who will pull over drivers under the influence? Local law enforcement. Moreover, cannabis products are valuable; break-ins and thefts will occur. Local police will answer those calls, all funded by local taxpayers. Many towns and villages contract with sheriff departments, so they’d respond, and that’s also local tax dollars supporting that. Who will address parking issues? How about odor complaints? All local employees’ time and labor.

I’m sure I don’t have to tell you that just about every local police force is short on officers, so don’t expect cash-strapped municipalities to be doing the work of enforcing public cannabis smoking rules. We simply won’t be adding to their job roles without fair support from the state.

What can we learn from looking at other states with experience in both retail and medical cannabis? That they recognize the importance of supporting local governments. In Colorado, local governments receive 10% of the state cannabis tax of 15%. In Illinois, local governments have the ability to add their own tax of up to 3.75% to support their work with local markets. And our neighbor Massachusetts has wisely given local governments the option to levy a 3% additional tax, as well as earmarking state revenues to fund public safety and training initiatives. In Vermont, so far, there is no such support for the work of local taxpayers whatsoever. The only exception to this is the dozen or so (Brattleboro included) municipalities who were wise enough to enact the state-allowed 1% Local Option Tax on all applicable retail sales, but this leaves well over 250 Vermont municipalities without that small support, even if they vote to “opt in” to participate, as our legislative leaders have decreed.

Make no mistake, local municipalities are the ones who will be enabling the revenue that the state will be making from recreational cannabis. Without the support of municipalities, and the taxpayers who fund all of the operations of those hosting communities, the State of Vermont would not be able to rake in these thousands of dollars in fees per applicant that are proposed. This proposal as it currently stands locks out our taxpayers of any hometown share of the tax revenue that will be generated, assigns no portion of the state monies received for any local support whatsoever, and now is proposing to cap the “local processing fee” to no more than $100 a year.

Again, some of the haste involved is no fault of the sub-committee members, nor the CCB itself, since the timelines for delivering the recommendations to our legislature are very tight indeed. Rushing anything always produces mistakes. But I argued several times to be placed within that sub-committee to no avail, and not once was I invited to appear in front of this particular body before a decision was made, even though I am the sole Advisory Committee appointee who would have insights into this aspect of local taxes and fees.

This proposal is insulting to common sense and works against creating a collaborative relationship with local governments. It is putting substantial costs and many risks squarely into local Vermont taxpayers’ lap with no reasonable support whatsoever. I will be urging my fellow Advisory Committee members to vote against sending this terrible Local Cannabis Taxes and Fees proposal any further, and I urge my readers to consider joining that effort. Let’s get back to the drawing board and work on a local reimbursement structure that will give us a solid future for a safe and sustainable Vermont cannabis marketplace in 2022.

Tim Wessel currently serves in his 5th year on the Brattleboro Selectboard, after serving as both Chair and Vice-Chair. He writes twice monthly on the convergence of politics and policy in Windham County.