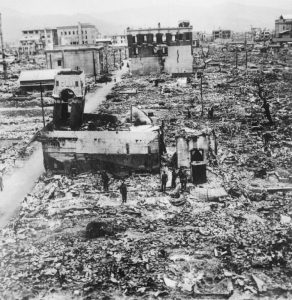 There’s a funny skit on the Don’t Crush That Dwarf album by Firesign Theatre in which two tv news anchors banter about the apocalypse.  “Last year, Patty, you and the viewers will be interested in noting that the world ended.”  To which his partner replies, “As we know it, Hugh!”

This is kind of what’s happened to us.  The world, as we knew it, has ended and now we’re in a new world, feeling less than brave, and facing all four Horseman of the Apocalypse at the same time.  For people who’ve been living in the virtual world for most of the last two decades, waking up and discovering that the real world that we were counting on is going, going, gone, the whole flaming mess we’re in must seem like a bridge too far.  How could we have gotten to this?

I’ll leave you to puzzle that out on your own while we move on to the more salient discussion of what should do with ourselves while the world finishes collapsing. If this really is the end of the world, how do we justify continuing to waste our time on business as usual?  Don’t we want to do something better with our lives, both individually and collectively, than what we’re doing now?  This assumes that you don’t love what we’re doing now.  If you do, you’re fine — carry on.

This thought came to me while I was preparing to switch gears once again to taxes and I thought, here they’re talking about nuclear war on NPR, and I’m about to spend an hour or more finding out why the PayPal account is out $28.  Does that $28 even matter given the enormity of the problems that face us “out there,” and what our lives are likely to be like in the coming days, weeks, months?

Assuming we get through this geothermal nuclear war scare, and I certainly hope we do, the fact still remains that we live on a planet amongst people, ourselves included, who see war — the murder and destruction of people and cities for political reasons — as a viable and even desirable option, depending on how much we hate (or fear) our enemy.

Why do we even believe in war anymore?  Haven’t we gotten beyond that with our AI and our Internet and our supreme intellectual superiority over all things?  How can intellectually superior people still think that blowing things up and killing people is a worthy endeavor that we have to keep doing?

War is one horseman we could do without and we have the ability and the means to do so.  If we could put personal gain and our emotions aside (which we can), we could let go of things that aren’t helping anyone, and embrace other views that serve us better.  For instance, people could negotiate fair terms with each other and avoid war.  We could do that.  But we’d need to let go of our hatred first, which will be difficult not because we can’t but because we don’t want to.  For whatever reason.  But all said and done, it is within our power to end war.

Ending war would give us more money to do other things, and this would enable us to work to solve other pressing issues, such as disease (the pandemic which is not really over even though we say it is), famine (our farming methods are killing us and the planet but we don’t care), climate change (whose effects are already proving disastrous), and poverty (which negatively affects not only the sufferers but society at large).

We could survive the 21st century with some form of ecosystem and culture intact, but we won’t be able to do it with the values we have now or the tools we’re using.  We need to stop choosing and following leaders who have these old, outworn, and completely counterproductive values.  We need to define for ourselves what the new values will be, and be honest with ourselves that if they don’t include peace, love, compassion, mutual aid, joy, fairness, and equality, then we can forget about it.  We’ll still be in the old world of war, hatred, selfishness, greed, anger, unhappiness, unfairness, and inequality.  And we all know where that leads — straight to where we are now, or to reiterate my opening salvo, “the end of the world.”

Do we want that?  I don’t.  And yet everything we do continues to support this bankrupt “dominant paradigm.” There has to be a better way, but until we find it, we’ll all keep marching on — to work, to war, off into the sunset.

We’re led by by our leaders to believe that we, people of Earth, are powerless to solve our problems.   We’re not.  We just don’t want to yet.  We’re not prepared to sacrifice any aspect of the present for a better future, even if the present sucks!  Maybe it’s just a matter of the devil you know, but if we don’t get over it, we’re going to run into a new devil and this one will be merciless.

In closing, I will prove my point about the present state of human values.  You will know where yours are by just how crazy my next sentence sounds to you: The old world may be ending but we can make a better world for all of us by adopting values that serve the entire planet and working toward goals that benefit us all.  See how easy it is?  Let’s just hope that we come to this realization before there’s nothing left to save but piles of ashes, corpses, and debris.