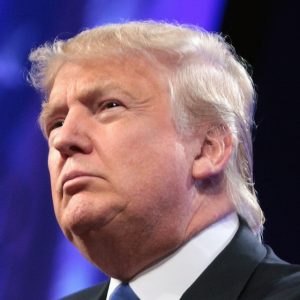 If it seems as though the US President is the boss of the whole world, it’s because in many ways, he is. Presidential powers for modern presidents are prodigious. With the power to impose sanctions and tariffs, control the government through executive orders, and order military action, a determined president can create a lot of geopolitical mayhem.

The most remarkable tool to that end is the economic sanction which is a form of punishment designed to destabilize countries America has strategic interest in by crippling their economies. Most sanctions bind American companies from doing business in the target nation. But recently, there has been a new form of sanction, called a secondary sanction, that aims to prevent any country or individual in the world from doing business with our declared enemy.

Trump is currently trying to enforce such unilateral, “long-arm jurisdiction” sanctions against Iran by threatening to sanction any country that buys oil from them. This includes such huge trading blocks as China and the EU. But more on that later. The fact is, the President of the United States has a lot of power, both domestically and abroad. Too much, one could argue, for one man.

Let’s look at those powers one by one.

The Power to Issue Executive Orders

The president has always had the power under the Constitution to issue executive orders as part of running of the government. An executive order is a presidential edict with the force of law which directs government agencies and staff to do or not do certain things (as long as they’re legal).

Simple as that sounds, executive orders can have far-reaching effects. Abraham Lincoln used them to suspend the writ of habeas corpus during the Civil War, as outlined in the Constitution as a remedy to be used during times of “insurrection and invasion.” Franklin Roosevelt established both the WPA during the Depression and internment camps during World War II by executive order.

Early presidents used executive orders rarely — George Washington issued only 8. But their usage rose toward the end of the 19th century. Theodore Roosevelt was the first heavy hitter with over a thousand. There was another big surge under McKinley during World War I (1,803). Franklin Roosevelt, with 3,503 excutive orders over 14 years, issued the most of any president. Modern presidents seem almost conservative by comparison. George W. Bush issued 291, Obama only 279, and Trump has 106 under his belt so far.

Examples of executive orders include:

Technically, Trump could use executive orders to close the southern border. It’s less likely that he could use them to block a Congressional investigation into himself….

The Power to Impose Economic Sanctions on Other Countries

Another awesome presidential power is to impose or extend economic sanctions against other countries. When the president imposes sanctions on a particular country or sector of its economy, American firms are no longer allowed to do business there. They can also target individuals from a foreign country as, for instance, when Obama issued sanctions against drug dealers in Nicaragua and Colombia.

Americans see economic sanctions as relatively benign but we are wrong to do so. Their intent, in almost every case, is to bring down the government of another sovereign nation. Unless we buy into the notion that America should run the world, including deciding who will be president in another country, we should be wary of these things. Moreover, from a humanitarian standpoint, the people suffer. See Venezuela.

Still, military wars are expensive and lead to dead Americans. That’s why, increasingly, when America wants to start something with another country, they do it economically. It’s less messy and provides lots of plausible deniability.

Economic sanctions are governed by the International Emergency Economic Powers Act or IEEPA. Note that word “emergency.” The power to impose sanctions is granted if the president declares the target to be an “unusual and extraordinary threat.” (Talk about language you could drive a semi through.) There are presently over 30 countries and entities under sanction.

The desired effect of sanctions is to destabilize a country’s economy and hence its government, with the goal of “effecting regime change,” which is US slang for overthrowing the government. The US is currently doing this in Venezuela, a nation that’s been under sanctions for nearly 20 years. We’ve even appointed a new president, but we can’t get the old one to leave.

Other countries under sanctions include Somalia, Congo, Sudan, Cuba, Libya, Burma, North Korea, the Western Balkans, Zimbabwe, Yemen, Lebanon, Burundi, Belarus, not to mention Russia, Syria, Iraq, Ukraine, and of course, Iran. Some of these countries have been under what are commonly called “punishing sanctions” for decades. It’s rare for sanctions to be lifted.

Legally speaking, US sanctions only bind US companies. If French, Chinese or Ethiopian companies want to do business with the sanctioned country, they are technically free to do so. However, the US has this thing called secondary sanctions, which basically amounts to a blacklist — if any country does business with a country under sanctions, the US threat is that they will get sanctioned too.

So far, America’s policy of pretending to rule the world and bullying it into compliance has worked. Other nations have been too afraid of American economic power to chance being put under sanctions themselves. But increasingly, there is resentment.

Take for example Iran, which America just put under new sanctions, with the stated goal, according to Secretary of State Pompeo, of destroying their economy and collapsing their government. Iran is understandably upset. They call America crazy. China is perturbed as well, but China will likely ignore the threat of sanctions, knowing America can’t really touch them (they hold a big chunk of our debt). The block of nations who are the most annoyed are in the European Union. The EU gets a lot of their oil from Iran, and they would like to continue that practice. America wants them to stop buying from Iran and buy US shale oil instead. Europe is resisting but will probably cave. And so it goes.

It’s important to remember that economic sanctions are a weapon of war. They are designed to destabilize a country’s economy and bring down its government. The president can do this without the participation or oversight of any other part of the US government.

The Power to Impose Tariffs

Tariffs are another weapon in the president’s arsenal when it comes to waging economic war against other countries. The president can impose tariffs during times of war (any war can justify tariffs against any country) or during a time of “national emergency.” You will recall that Trump wanted to declare a national emergency over the US/Mexico border. That would have served multiple purposes, including justifying tariffs against anyone he chose.

The Power To Order Military Action 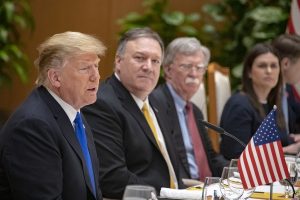 Last but far from least, the president can start wars. Under the US Constitution, the president has the power to order US military forces into combat wherever he chooses, providing that he is able to make a case that the target of the military aggression deserves it by being a “threat to national security.”

Congress may also declare war, or they can pass an authorization for the use of military force, which amounts to the same thing but sounds less serious than “war.” As most Americans now know, America has not officially declared war since World War II. Nevertheless, our nation has been involved in numerous armed conflicts on several continents since the 1950s, too many to list. Only a handful were even authorized by Congress, let alone declared. Exceptions were the Gulf War in 1991 and The War on Terror which was authorized indefinitely in 2001 making it America’s first “forever war.”

Since 1973 when Congress passed the War Powers Act, any military conflict lasting longer than 60 days requires congressional approval. Trouble is, presidents don’t follow the provisions of the Act and Congress doesn’t challenge them. Barack Obama, for instance, skirted the War Powers Act when he began the war in Syria by saying that they were already authorized by the authorization for the War on Terror.  Previously, in Libya, the Administration’s excuse was that the conflict didn’t involve ground troops or “sustained fighting.”  Apparently, bombing the hell out of people from planes and drone command centers isn’t bellicose enough to need Congress’ imprimatur.

Currently, the United States is threatening war against nations on two continents — Venezuela and Iran. In the case of Iran, US warships and bombers are being deployed to their area although Iran claims to regard this as nothing more than psychological warfare and intimidation. Says National Security Advisor John Bolton, who takes a broad view of provocations, “any attack on United States interests or on those of our allies will be met with unrelenting force.” As for Venezuela, Bolton and Pompeo continue to insist that “all options are on the table.” It remains to be seen if the US will make good on these threats, even as Venezuela and Iran continue to resist.

So now you know. The US president can start economic and military wars, bring down foreign governments, impose tariffs, exert direct power over the domestic sphere, and more — and he doesn’t need anyone else’s approval to do it. Regardless of which party is in office, that’s a lot of power for one person. Perhaps it’s finally time to revisit the issue of presidential power and impose some limits. We could call it the Trump Memorial Presidential Powers Act, lest we forget the two-edged sword we’ve given our chief executive.