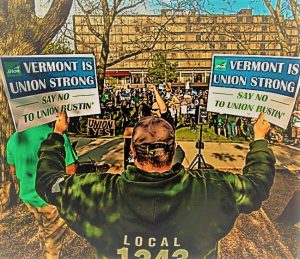 Demand a New Deal – No To Racism – No To Austerity – Union Yes!
“An Attack On One Is An Attack On All”

WE DEMAND A NEW DEAL!

NEW DEAL: We demand the Federal Government, the State of Vermont and municipalities commit to a economic recovery effort through a progressively funded NEW DEAL that puts the working class first, and gives rise to a more directly democratic society free of racism, discrimination, oppression, and economic exploitation of the laboring classes;

BURLINGTON WORKERS & PUBIC COME FIRST: We demand that the City of Burlington and Mayor NOT cut (non-management) wages, jobs, or public services – not now – not ever. The City of Burlington and the Major must not ask or expect any of the City Unions to open their contracts to make concessions. Where cuts must take place they will come from the top – specifically from political appointees, upper-management, and Police Department brass first! Let it further be known that AFSCME Local 1343 supports the City of Burlington canceling any and all construction agreements with private non-Union companies and instead use in-house Union labor or Union labor from within the Vermont Building Trades Council of the AFL-CIO for any and all City construction or renovation projects. We further demand that the City and Mayor sign a contract with IATSE Local 919 so that skilled Union labor, paid at livable wage rates, are used to efficiently and professionally meet the City’s performance needs. And finally, we require that any business or entity subject to the City’s livable wage ordinance also be subject to a Card Check Union recognition procedure;

UNION RIGHTS: We demand that the State of Vermont pass pro-Union legislation whereby workers have the tools they need to form a Labor Union of their own. Here we require Card Check for all public sector workers. We further require that the State (and local governments) pass legislation that compels private businesses to also implement Card Check Union recognition (and other labor rights) through a Labor Progress Agreement (LPA) whenever said private business seeks to gain government contracts involving public money and/or when said business gains advantages through tax benefits and/or when said business apply for a State or Local license;

CITY & TOWNS MUST HOLD THE LINE: We demand that all municipalities maintain their current jobs and public services;

MUNICIPAL WEALTH TAX: We demand that Cities & Towns seek charter changes to allow municipalities to implement a progressive local income tax and luxury tax only on their wealthiest residents to achieve adequate revenues;

PRIVATE EMPLOYERS MUST RESPECT WORKES & UNIONS: We demand that private employers respect the rights of workers, honor all existing Union contracts, and that management at all non-Union shops commit to voluntary Card Check recognition when their workers choose to for a Union. Further we, like the Workers Caucus, support the Colburn-Kornheiser “Fair Jobs Recovery Plan” and call on it to be adopted by the Vermont House and Senate;

CRISIS PAY: We demand that ALL Essential Workers, including farm workers regardless of immigration status, receive crisis pay;

SAFE WORKING CONDITIONS FOR HEALTHCARE WORKERS: We demand that ALL Medical Workers (and ALL Essential Workers) be provided adequate and free Personal Protective Equipment;

ENACT COVID-19 WORKERS COMP: We demand that Workers Comp cover any and all Essential Workers who may become sick with COVID-19;

NO STATE JOB CUTS OR CUTS TO SOCIAL PROGRAMS: We demand that the State of Vermont NOT cut non-management or supervisory pay, jobs, or social services delivered on behalf of the public, and that the Unionized State workers receive Paid Family Medical Leave as was agreed to during bargaining;

NO CLOSINGS OF VERMONT STATE COLLEGE CAMPUSES: We demand that NO Vermont State College campus be closed, that VSC and UVM non-management workers suffer no layoffs or pay cuts, and that the State of Vermont implement free in-state tuition for all Vermonters;

INVEST IN LOCAL INFRASTRUCTURE: We demand that the State of Vermont make significant additional funds available to municipalities and school districts for local public infrastructure projects with the requirement that any contracted services paid for with these funds be done only with employers that are Union and pay prevailing wages/ We further demand that Vermont municipalities pass Responsible Contractor Ordinances whereby ALL major construction projects require workers to be paid the prevailing wage;

STATE INVESTMENT IN RENEWABLE ENERGY: We demand that the State of Vermont make significant public investment in renewable energy and efficiency, and that all construction jobs created by such projects be awarded to Unionized contractors whereby all workers are provided a prevailing wage. We further support the intent that any new renewable energy plants built with public money remain publicly owned and maintained/operated with Union labor after completion;

EXPANDING THE SOCIAL SAFETY NET: We demand that the State of Vermont commit to legislation that further builds a stronger social system whereby all workers, among other things, have healthcare as a human right, earn a livable wage, receive paid family medical leave, have adequate paid sick days, have access to dignified affordable housing, and do not suffer food insecurity;

NO TO RACISM AND DISCRIMINATION: We demand that the State of Vermont commit to combating racism and discrimination in all its forms and put an end to racial profiling, and other practices of discrimination based on economic class, gender, immigration status, sexuality, disability, or nationality;

WOMANS RIGHT TO CHOOSE: We demand that the State of Vermont remain steadfast in its commitment to defending a woman’s right to control her own body;

FIRST NATION RIGHTS: We demand that the State of Vermont recognize and support the sovereignty rights of the four Abenaki Tribes;

TAX THE RICH, GREEN NEW DEAL BONDS, & STATE BANK: We demand that the revenue needed to fund these NEW DEAL projects be attained through the progressive taxation of the wealthy and on corporations (not on low income and working class people!). We further support the creation of VT Green New Deal Bonds as a means to raise additional revenue. We also support the formation of a Vermont State Bank so that we can better retain our public wealth and invest it for public good;

DIRECT DEMOCRACY: We demand that the Legislature begin the process for adoption of a Constitutional amendment whereby a directly democratic Town Meeting based referendum system of self government be implemented throughout the Green Mountains. We require this expansion of democratic rights so as the gains working people make through this NEW DEAL can be effectively defended for generations to come;

The Burlington June 9 picket will be vehicle based. We shall meet at the Department of Public Works building at 645 Pine Street at 3:30pm. There we will hear from a number of speakers. From there the caravan will travel together to downtown, where we will circle the City Hall block a number of times, before ending in the Marketplace Parking Garage. There, on the top floor, we shall hear from additional speakers. The speakers will speak through a PA and we shall transmit the speeches into individual vehicles through a cell phone connections. ALL UNION MEMBERS AND TRUE ALLIES OF ORGANIZED LABOR ARE WELCOME.