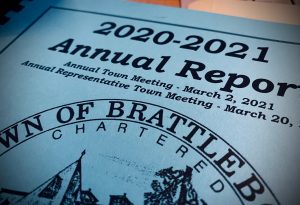 Mr. Daims seems to have some confusion as to the roles of both Representative Town Meeting and of the Selectboard. Lately he has been fond of quoting our Town Charter (reviewed and revised as recently as 2013-2016) which states that RTM is “a guiding body for the town and a source of ideas, proposals and comments…” without allowing that full paragraph’s quote to continue with “It exercises exclusively all powers vested in the voters of the Town.” The mention of the powers of voters is the important phrase there.

Make no mistake: Representative Town Meeting is a powerful and respected body, charged with approving the Selectboard’s budget and ratifying many decisions made at the Selectboard level. It may reject a Town budget in full, sending the legislative branch, the Selectboard, back “to the drawing board” and force a return to the representatives of the voters for ratification. It may act as “a guiding body” for Brattleboro with ideas and comments, and indeed it does, time and time again. In my substantial time serving on both RTM and the Selectboard I cannot recall a time when a clear will or desire of RTM was flatly rejected by a Selectboard.

But one thing that RTM does not do is run our Town. That role is performed by the Selectboard, with the day-to-day decisions made by the Selectboard’s employee, the Town Manager, who leads our highly skilled and professionalized staff.

I continue to be a proud fan of Brattleboro’s one and only Representative Town Meeting. I believe it is an elegant solution to the problem of what would be a very unwieldy Town Meeting, in a town our size, if we were to hold it like smaller VT towns. It allows a directly elected group, made up of individuals who can choose to make the time needed to examine each article carefully and deliberate democratically, approve the actions of the Selectboard at least once a year. This body of representatives of the voters, because they have committed themselves to the time and effort (and sacrifice of a long day or days every spring) to pour over pages and pages of budget tables and explanations of decisions, can make more informed decisions (and be a better “guiding” force) than twelve thousand residents who have not made that commitment. And no one should forget that RTM also has a respected RTM Finance Committee, a select group that examines the Selectboard’s budgets even more closely than RTM members do. This year their insights have, in my opinion, been especially valuable to our Town.

Ultimately, all voters are directly in control of both RTM representatives and your Selectboard through direct election every March. If the voters do not like the direction of the Selectboard, they can have a direct influence using the ballot, by changing 3 of the 5 Selectboard members in every single election year. That’s remarkable, and their power does not stop there, since the Charter clearly lays out the additional “Powers of the People” via initiative, referendum, and recall of Selectboard members.

If Mr. Daims or others, after fully understanding these realities concerning the respective powers of RTM and the Selectboard, still seek to change that power relationship, the only way to do so would be to lead a charge to change the Charter, which must then be approved by the Vermont legislature. The most effective and democratic way to do that would be to participate in the next Charter Review Commission, which, because of the substantial statewide changes to our school boards structure, is necessary soon anyway. This would be the best method to discuss ideas such as a “warrant committee”, the protocols of RTM, or the general “balance of powers” between the representatives and the Selectboard.

We should all welcome this healthy conversation, and encourage Mr. Daims to better understand the history and reasoning behind Brattleboro’s strongly democratic political structure, before seeking to “reform” a system that is already calibrated well to serve our community.