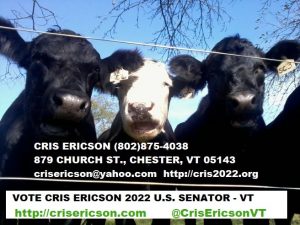 We pay our taxes to the federal government, the I.R.S., and then the U.S. Congress votes to give billions of our tax dollars to the N.I.H., the National Institute of Health, and then they give out our tax dollars for medical research to create new vaccines and prescription drugs and medical devices, BUT since the Bayh-Dole Act was passed we have been cheated because the lead researcher is allowed, under this federal law, to own the Patents, which are the ownership rights to the new inventions WHICH WE, THE TAXPAYERS, PAID FOR THE RESEARCH, DESIGN AND DEVELOPMENT to create – SO, WHERE IS OUR SHARE OF THE PROFIT? WHERE IS OUR RETURN ON INVESTMENT OF TAXPAYER DOLLARS? We are being used as slave labor to make the pharmaceutical corporations rich! If you agree that we must stand up and demand our share of the TRILLIONS of dollars in profits the pharmaceutical corporations make using our tax dollars for the R&D, then vote for me, Cris Ericson. With our share we can pay down some of our national debt to keep our Country more secure and we can use our share of the profits for Health Care!

We pay our taxes to the federal government, the I.R.S., and then the U.S. Congress votes to give our tax dollars to the Pentagon, and the Pentagon hands out our tax dollars for research, design and development of new weapons and bombs and jets and drones which are then sold worldwide by Defense Contractors to our Allies for Trillions of dollars in profit. Where is our share of the profit, after all, we paid for the R &D, the research, design and development, and if you agree that we deserve a return on investment of our taxpayer dollars, then vote for me, Cris Ericson. We could use some of this money to pay down our national debt and we’d have plenty left over for Education and College and Technical Trade School programs. We have to stop being slaves to the Defense Contractors!

(3) FREEOM OF CHOICE FOR ADULTS

Vermonters have made it clear that the majority wants marijuana to be legal under federal laws. The current folks in the United States Senate are dragging this issue out for as long as possible because as long as marijuana is not legal, they can keep collecting political campaign funds from people who want it to be legal. If you believe marijuana should be legal now, then vote for me, Cris Ericson