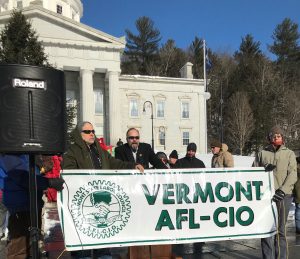 Town Meeting Day Message From VT AFL-CIO President David Van Deusen:
3/1/2022, Cabot Vermont – Today is Town Meeting Day here in our Vermont. While a community may have many Town Meetings throughout the year, the first Tuesday in March is, for the most part, when all our communities come together to make important decisions for the coming year. From Town budgets to School budgets, from local ordinances to expressing views on a range of topics, Town Meeting is where Vermonters debate and decide on the issues of the day.

And traditionally it is at such Town Meetings that ALL the citizens of a community act as the legislative branch of local government, with the power to publicly debate, make motions, propose amendments, and ultimately vote from the floor on those issues set before them.

And while it is true that communities are also free to democratically choose to alter such traditions, in some cases placing larger money items before the people by way of a ballot box, by enlarge our rural Towns continue to practice a direct participatory democracy the likes of which is otherwise absent from the American political system. Such is the radical rights set forth in the Vermont Constitution; a document which finds its roots in the armed rebellion of the Green Mountain Boys from 1770-1775, the American Revolution thereafter, and the 14 years from 1775-1791 when Vermont was its own independent Republic.

Today here in Cabot, I dutifully placed my vote in favor of both the Town & School budget and was happy to also vote in favor of allowing Vermont’s Abenaki Tribes to hunt and gather in our publicly owned Town Forest (which of course was Abenaki land centuries before any European settler stepped foot among these hills). And across Vermont, from Bennington to Burlington, From the Southern Greens to to the Northeast Kingdom, folks are likewise making real and meaningful decisions about their Towns that will matter for the coming year and beyond.

But with the rise of the COVID-19 pandemic, and with Montpelier (our capital) allowing flexibility regarding communities more easily being able to suspend in-person meetings in favor of mail in ballots and other accommodations aimed at stopping the spread of the virus, the great majority of our Towns have decided to err on the side of caution and suspend the participatory element of our traditional democracy. In fact with the pandemic still not at a complete end, only 40 Vermont communities (out of 246) met in their Town Halls. To put that in perspective, pre-pandemic 75% of our Towns held floor votes.

Wanting to support and protect those of us who have compromised immune systems, I understand and accept this for 2022 (as I did also in 2021). But come 2023 this must change, and we must return to our participatory traditions and those rights secured by force of arms some 250 years ago.

With 99% of Vermont’s 12 and over population vaccinated against to Coronavirus, and 87% of our total eligible population likewise vaccinated, (barring a new unforeseen health crisis) we should not further defer the returning to those democratic traditions we hold dear and which, in part, define us as a people. And for this, as Vermonters we must now begin to set our sights set upon a return to the a traditional Town Meeting in 2023.

But returning to what we have had before, while good, is not good enough. And while democracy is increasingly under dire threat throughout the United States, Vermont, guarded by our rugged mountains, must again stand tall to show America that we can and must do better. And here I am proud to be the President of a 11,000 member Vermont AFL-CIO which staunchly supports a strengthening of our participatory and directly democratic traditions by expanding the scope and authority of Town Meeting (in aggregate) to include issues of statewide concern.

In fact our Vermont AFL-CIO platform, our Ten Point Program For Union Power, calls for a change in the Vermont Constitution to allow for a directly democratic Town Meeting based referendum system of self government. And as President of the State Labor Council I pledge to you that in 2023 (at the start of the next biennium) the VT AFL-CIO will endeavor to have such a Constitutional Amendment introduced in the Vermont Senate.

As we look to the future, as working class people, as Vermonters, let us commonly understand and appreciate that it will only be through the building of a more directly democratic society, one coupled with a commitment to economic equity and social justice, that not only shall we stay true to the vision of those revolutionaries who came before us, but also shall we be able to build that better world that we already carry in our hearts. And through our continuing freedom and unity we shall prevail.

Click on the following link to read the VT AFL-CIO Platform, the Ten Point Program For Union Power (also known as The Little Green Book): https://vt.aflcio.org/news/vermont-afl-cio-ten-point-program