The 27 $million to the family of George Floyd answering allegations that his civil rights were violated within a flourishing American culture of excessive force, racism and impunity by implication puts protective value on all lives in the USA. Remaining valueless are the millions of lives taken overseas by Americans, including by Black GIs who afterward return home to face mortal racist danger themselves. 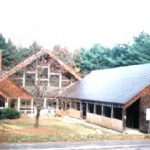 Recently, the Chief of Police wrote a letter to the people of Brattleboro, referencing the death of George Floyd at the hands of a Minneapolis police officer.

He mentioned that the police have a professional duty to protect and serve everyone in the community with dignity and respect. He also related that “We have made de-escalation tactics a priority in use of force trainings. Once the resistance stops or the situation is under control, the tactics need to evolve with the situation.”

It was not always that way here in Brattleboro.

Another black man is murdered by American police. People are outraged and they take to the streets. Their protests help to ease the pain of injustice every black person has to endure every day while trying to enjoy the privileges and rights of citizenship that the rest of us take for granted.

Those in power will sit back and do nothing to change the root causes of injustice that have led to yet another horrific moment in American history. They will engineer sound bites and they will pick out easy political memes to try to ease their base of the brain-dead followers who also are in the same political camp as the rich and privileged. They will even go so far as tear-gassing crowds of people near their home so they can take a walk whose purpose is to use the Bible as a prop in a culture war of their own creation. 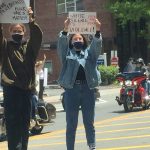 Hundreds of protestors in Brattleboro on Sunday joined in the nationwide protests over the killing of George Floyd.

Lining Main Street from one end to the other on both sides of the streets, were social-distanced people with masks and signs, chanting and singing. This crowd was probably as big if not bigger than the Iraq War protests in 2003.

A sampling of signs: 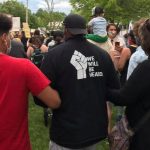