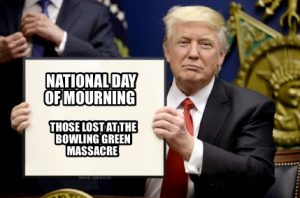 How come you never heard of it?

Quote: I bet it’s brand new information to people that President Obama had a six-month ban on the Iraqi refugee program after two Iraqis came here to this country, were radicalized and they were the masterminds behind the Bowling Green massacre.

Kellyanne Conway, Counselor to the President

Fact check: The Bowling Green massacre is a fictitious incident alluded to by U.S. Counselor to the President Kellyanne Conway in interviews with Cosmopolitan and celebrity news website TMZ on January 29, 2017, and in an interview on the MSNBC news program Hardball with Chris Matthews on February 2, 2017

Why did Conway say it did?