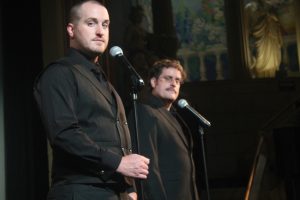 But now the readers will record all together on the Latchis’ main stage. Gelter said, “while it is not only a beautiful space to perform in, the stage is large enough that we can have up to six performers recording together while maintaining proper social distance. In this trying time, we cannot let audiences into our performance spaces, but that doesn’t mean the performances can’t still happen.”