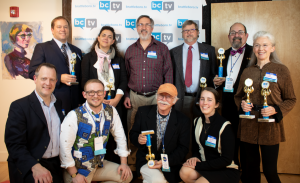 BRATTLEBORO, VT—In honor of Community Media Day on October 20, Brattleboro Community Television announces its producer awards winners for 2019. BCTV’s annual producer awards ceremony will be held on Thursday, October 24th at 6:00 p.m. at 118 Elliot. The public is invited. The People’s Choice Award winner, which is a popular vote among the year’s top-viewed videos, will also be announced that night.

The following organizations and individuals will be recognized for their achievements during the past fiscal year:

Starting in January 2019, WTSA Radio, one of the few remaining locally owned media outlets, began uploading ‘Morning News with Ian Kelley’ to YouTube, which is then rebroadcast by BCTV on channel 8 at Noon and 6 PM weekdays. Ian is joined on the show by fellow news anchor Tim Johnson, along with a variety of guests including athletes and artists. WTSA’s partnership with BCTV benefits both organizations and especially the local community.

This award typically recognizes the work of a single nonprofit member, but this year we salute a cluster of nonprofits working together on the issue of Substance Use. These organizations used BCTV to achieve their missions by producing videos or recording events that reflect the community’s interest in addiction prevention and response. We celebrate the particular efforts of the following producers:

Kathy and Rick Hege have supported BCTV’s coverage of public meetings in Townshend for many years – Kathy, as a long time Selectboard chair, and Rick, as the webmaster of unofficialtownshendvt.net. Their high level of cooperation and assistance helps BCTV staff record municipal meetings for those that can’t attend, which promotes transparency in town government. It is gratifying for BCTV to be valued by municipal leaders who dedicate their time and energy to public service.

Dan learned how to produce a show that incorporates screen-capturing and multi-camera editing for ‘Gematria Today’, in which Dan explains the ancient Caballistic practice of Gematria, coding numbers into letters to find hidden meaning in words. Dan’s series is a good example of an instructional multimedia video.

Producer of the Year: Alex Evans

Alex Evans interned with BCTV in 2017 as credit for his Landmark College ‘Civic Engagement’ class. For his internship, Alex, who was the station manager for Landmark’s student radio station, chose to create a mini-documentary about BCTV. Alex came back last fall with a College-sanctioned internship of 90 hours. While he helped with editing and directing, he also produced his weekly radio show, ‘Talking Nerdy,’ for TV and YouTube, and it was a huge hit. Alex has since graduated and now lives in Portland, Maine, but not before he made his mark on BCTV and our viewers!

Series of the Year: Meg Mott’s ‘Debating Our Rights’ & ‘Good Clash: The Art of Productive Disagreement’

‘Debating Our Rights’ and ‘Good Clash: The Art of Productive Disagreement’ are two popular discussion series presented by (retired) Marlboro College professor Meg Mott, produced by Janis Chaillou and Em Richards of For The Record Video. Meg Mott leads discussions with active participation by audience members to identify shared values and encourage healthy debate.  Janis Chaillou and Em Richards worked with Mott to record both series in light of the high level of interest in her discussions.

Sponsor of the Year: Karen Ameden of D&K’s Jamaica Grocery

As a sponsor of BCTV’s Town Meeting coverage for years, Karen Ameden, owner of D&K’s Jamaica Grocery, has been one of the few small businesses to support BCTV. When BCTV approached the select boards in our service territory for financial support in light of a decline in federal funding for public access television, Jamaica required 35 signatures in order for residents to vote on the issue at Town Meeting Day. Karen volunteered to make the petition available at her store so that local residents could sign – and they did. When we send a producer up Route 30 to cover meetings, this kind of local support is our reward!

BCTV’s 50+ local producers were nationally recognized in 2019 and together with staff produced more than 1300 hours of local programming over the past year.

The BCTV awards ceremony is fashioned after the Emmys, but a Halloween themed dress is suggested this year due to the timing of the event. Audience members will enjoy dinner by The Marina, and the chance to mingle with creative types and community volunteers. A $5 donation is suggested.

Brattleboro Community Television is a community media center serving Brattleboro, Dummerston, Guilford, Jamaica, Newfane, Putney, Townshend, and Vernon. BCTV’s mission is to promote civic engagement and transparency and to empower community members to share their knowledge, views, and creativity, without prejudice.  To learn more about BCTV, visit brattleborotv.org or call 802-257-0888.