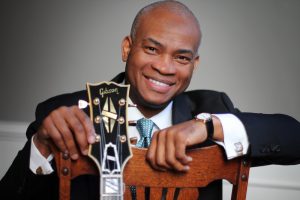 Acclaimed Guitarist Russell Malone to Perform with Quartet at the Vermont Jazz Center on Saturday, March 16th at 8:00 PM

The Vermont Jazz Center welcomes guitarist Russell Malone to its stage on March 16th. He will appear with his established quartet including pianist Rick Germanson, bassist Luke Sellick and drummer Anwar Marshall. Perhaps best known for his Grammy nominated work with vocalist Diana Krall, Malone is one of the leading guitarists on the jazz scene today.

Russell Malone is a hard-swinging guitarist also known for his evocative ballad playing. His signature sound is a full-bodied tone with long, fat, sustained notes, reminiscent of one of his early heroes, George Benson. According to his website, “on a school night when [he] should have been in bed” in 1975, he saw George Benson play “incredible things” on a TV special called “Seven Comes Eleven.” Malone quickly purchased two of Benson’s recordings, The George Benson Cookbook and Benson Burner,” which, along with Wes Montgomery’s Smokin’ At the Half Note and Boss Guitar, then set him on what he says is “a course that I have not deviated from.”

Malone has refined his tone control to create an instantly identifiable sound and feel.  He is a “slow-burner,” taking his time, conveying melodies and improvisations in an unhurried manner, even over burning-fast tempos. In a 2016 interview with All About Jazz, an online jazz magazine, Malone declared “It’s sound, man-that’s the first thing that people hear, before they even start to pay attention to the notes you’re playing. The sound of your instrument is your voice, man. … Just like Orson Welles, or James Earl Jones or Paul Robeson. What gets your attention is the sound. All the greats have it.” The sound quality Malone conjures on his guitar also has roots in the soulful choir he grew up accompanying at the Pentecostal Church he and his family attended during his youth. In a 2018 interview with Downbeat Magazine, Malone stated that “It fascinated me how these church mothers singing spirituals would move people to tears, or to get the Holy Ghost and shout in response. That’s when I started to really listen.”

Esteemed guitarist Kurt Rosenwinkel speaks with reverence of Malone (who is seven years Rosenwinkel’s senior). When listening to a Malone cut in a 2006 DownBeat Blindfold Test Rosenwinkel effused “Obviously, we are in the capable hands of a master. Absolutely fluid touch and beautiful integration between moving lines and harmonic cadences. The sound of the instrument is well-balanced throughout the entire register. The relaxed quality of everything that’s being played gives it such a warm feeling. To play that stuff is extremely hard. This is an absolute master, the best of the best.”

Along with his inimitable sound, Russell Malone has developed his own soulful improvising language. This suits his chameleon-like ability to include a wide variety of styles including funk, blues, pop songs, bebop and luscious ballads into his repertoire. In a Jazz Times Magazine interview from 2016, Malone elaborated on his open-minded attitude by saying that “… I learned at an early age that Chuck Berry, B.B. King, Robert Johnson, Glen Campbell-they’re just as important as Charlie Christian, Wes Montgomery or any of these jazz players.” In a 2004 Downbeat 2004 blindfold test – he affirmed this by going on to say that “I always tell young players when they come here, don’t just get locked into one thing. You may have your taste and your preferences, but go out and hear all kinds of different things. Go out and hear these different kinds of players, because you may find something you’re able to use.”

Malone’s website promo acknowledges the long list of artists he has played and recorded with, citing performances with such diverse artists as B.B. King, Aretha Franklin, Gladys Knight, Andy Williams, James “Blood” Ulmer, and Ornette Coleman. Malone says “I love to swing, but I don’t look down my nose at other styles of music, or other musicians. I’ll play with anybody, if the music is good.”

The pianist in Malone’s group is Rick Germanson, winner of the 1996 American Pianist Association Jazz Piano Competition. He has released four albums as a leader and has played and recorded with such jazz titans as Elvin Jone, Regina Carter, Tom Harrell, Slide Hampton, Frank Morgan, Eric Alexander, Frank Lacy, Marlena Shaw, Donald Harrison, Brian Lynch, Charles McPherson to name a few. Germanson has been a member of the Cannonball Legacy Band (led by Louis Hayes since 1971), and is a touring member of Pat Martino’s tribute to Wes Montgomery. Germanson is professor of jazz studies at the Jackie MacLean Institute at Hartt School of Music.

Malone’s bassist is Luke Sellick.  Sellick appears and records in the working bands of Benny Golson, Jimmy Greene, Johnny O’Neal and others. A graduate of The Juilliard School, he was mentored by legendary bassist Ron Carter and has become a fixture on the NYC jazz club scene in places like Smoke, Smalls and Mezzrow. He has recently appeared in concert with George Coleman, Lewis Nash, Houston Person, Steve Nelson, Donald Vega, Orrin Evans, Carl Allen, Renee Rosnes, Mike Ledonne, Papo Vasquez, Joe Chambers, Ron Blake and many others at venues including The Village Vanguard, Blue Note and Jazz Standard.

The newest member of Malone’s quartet is drummer Anwar Marshall who is rapidly becoming one of New York’s first call drummers. He can be heard on recordings with Dave Douglas, Josh Lawrence, Luke O’Reilly, Ed Cherry and Orrin Evans’ Captain Black Big Band.

Discover the soul-drenched sounds of Russell Malone and his working band for yourself live at the Vermont Jazz Center on Saturday, March 16th at 8:00 PM. Malone says “I feel that working bands are very important…Over time, you develop a certain level of trust that only comes from spending time playing together. I’m very happy with these musicians.” This group’s sound is tight and their sense of simpatico has been heightened by a deep and trusting connection.

The VJC is especially grateful for the sponsorship of this event by guitarist Chris Welles. Welles is a long-time supporter of the VJC and his quiet, generous influence on the community through scholarships and concert sponsorships is immeasurable. The VJC is also thankful for the ongoing support of Holiday Inn Express Suites of Brattleboro. VJC publicity is underwritten by the Brattleboro Reformer, WVPR, WVEW and WFCR.

Tickets for the Russell Malone Quartet at the Vermont Jazz Center are $20+ general admission, $15 for students with I.D. (contact VJC about educational discounts); available at In the Moment in Brattleboro, online at www.vtjazz.org, or by email at ginger@vtjazz.org.  Tickets can also be reserved by calling the Vermont Jazz Center ticket line at 802-254-9088, ext. 1. Handicapped access is available by calling the VJC at 802 254 9088.

Russell Malone Solo, performing the Bee Gee’s How Deep is Your Love

The Russell Malone Quartet to Perform at the Vermont Jazz Center on Saturday, March 16th at 8:00 PM

What: Original compositions, jazz arrangements of pop songs and soulful interpretations of jazz standards, performed by one of the finest jazz guitarists in the world. Appearing with his working quartet.