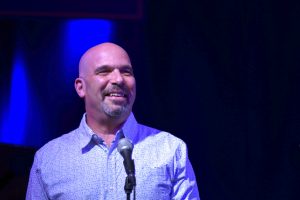 The Convergence Quartet to Perform at the Vermont Jazz Center, Saturday, June 20th at 8:00 PM

The concert will be performed live with only the production staff in attendance; it will be live streamed to everyone with internet access on the homepage of the VJC website (www.vtjazz.org) as well as the Jazz Center’s Facebook page (https://www.facebook.com/VermontJazzCenter/live/). The concert will be preceded by a 15 minute interview of Uman conducted by Tom Reney discussing Uman’s 20+ year tenure at the VJC.  The interview will be recorded the day before the show and streamed immediately preceding Saturday’s concert.

Initially the Convergence Quartet was scheduled to perform live and in full force this month, but modified the plan to a live stream in light of the pandemic.  In order to stay within safety guidelines, the VJC has reduced the number of performers at this event to the core trio plus vocals.  The group usually includes a front line of vocals, trombone, trumpet and saxophone.

Uman says that this is his first public performance in over three months. The last event he played was at a club in Springfield, Massachusetts on March 15th. It was the same evening that Massachusetts Governor Charlie Baker suddenly announced the suspension of all public gatherings and the temporary closures of bars and restaurants. Uman noted that “the atmosphere at our last gig verged on giddy, the band dug in so hard because nobody knew when we would be making music as a team again.” He went on to say that “a feel of uncertainty continues to permeate our lives. We in the music community are dependent on playing music in public. We thrive on communicating with listeners in a live setting where you can see and feel their response and sense the vibe of your bandmates. During the pandemic, solo concerts live streamed from our homes have kept many of us in touch with our audiences, but we’re missing the human contact, the encouragement, the body language. I am so thrilled to play with this group again. We are finally in a situation where we can present a sound that is defined by our group interaction. In the case of the Convergence Trio with Wanda we have evolved into a collective voice that has, as its foundation, years of relating with each other as friends and musical journey-mates.” Uman also referred to an interview he had with Bad Plus pianist Orrin Evans: “Orrin summed up how many of us feel. He said that during this period of isolation ‘it’s as if our purpose in life has been pulled out from under us.’ Many musicians are struggling financially, but with live performances lacking there’s also been a spiritual void. Our feelings, our messages and our identities are expressed via the transmission of soundwaves to living people who respond energetically. This creates a positive feedback loop that reinforces the creative spirit and bonds us with our audience, it gives meaning to the effort that goes into practicing and preparation and makes us feel that our lives have purpose. This live streamed event gets us a bit closer than we’ve been and I’m grateful for the opportunity.”

For years Uman has used this annual June concert as a platform to perform his original music. This year’s program continues on that theme, although it won’t include new compositions written for larger ensemble for their timbral effect. This show will include three new tunes – a ballad written for a dear friend who recently passed away, another piece that travels between several time signatures, and a 6/8 Latin Jazz composition that celebrates the abundance provided by nature after a bleak winter. The Convergence Quartet will also play pieces influenced by Uman’s formative years in Colombia, South America including a cumbia and a bambuco infused with jazz harmonies. Noted jazz author and educator Len Lyons (The Great Jazz Pianists, Jazz Portraits and others) wrote the liner notes for the Convergence Project’s first recording and said that “This music has an intelligent plan and a fullness of sound that frequently takes us beyond the tune-and-variations paradigm that jazz sometimes falls into out of habit or tradition. This album presents us with textured and colorful music, which celebrates its jazz roots without the common formulaic limitations.”

Uman continues to collaborate with lyricists Verandah Porche and Patty Carpenter who have written a new set of lyrics for one of Uman’s tunes called “For the Mothers.” This piece pays homage to the love and nourishing female spirit of those who raised us. Porch and Carpenter playfully bring their firsthand experience to the tune using word games and ultimately making a strong connection with the archetype of mother earth. Singing with the Convergence Quartet will be Wanda Houston who brings a powerful fullness and candid selflessness to Porch and Carpenter’s clever lyrics. Houston will be singing “Snowy Day Bossa,” “Thanks Moon” (for Moonlight Davis) and “Wheel of Time.”

At the core of the Convergence Quartet is a rhythm section that can play authoritatively in a wide variety of styles while simultaneously “playing in the pocket.” Uman sought out musicians who bring a youthful, strong yet sensitive voice to his compositions. He found this in a rhythm section he had originally met as friends while teaching at the University of Massachusetts (Amherst) in the early 2000s. David Picchi and Jon Fisher accepted the task of studying and assimilating Colombian rhythms into their own vocabularies. They are a rhythm team that brings a sense of unity cultivated from years of playing bass and drums together in numerous groups exploring a wide range of styles.

Originally from Chicago, Wanda Houston grew up singing gospel music in church and with her family’s theater group.  She has led an active career as an actress, performing on the grand stages of Los Angeles, Las Vegas and Broadway; she toured Europe as the wicked stepsister in “Sisterella” (for which she won “Best Supporting Actress in a Musical” by the NAACP) and has held lead roles in “Ain’t Misbehavin’,” “Hello Dolly” and “The Best Little Whorehouse in Texas.”  Houston was part of the gospel group, Broadway Inspirational Voices (BIV) with whom she performed on PBS’s Great Performances and earned a Grammy nomination. She has shared the stage with Oleta Adams, Patti Austin, Eartha Kitt, Liza Minelli, Pattie Labelle, Joe Cocker, Celine Dion and Barbara Streisand. Wanda sings jazz with authenticity and passion; she is a great story-teller, too – coloring the spaces between her songs with fascinating stories of her youth and the trials and tribulations of life on the road.

David Picchi has been performing and teaching music throughout the Pioneer Valley since 2001. As an electric and double bass player skilled in multiple genres he has been called to play on many diverse recording and performance projects. Picchi is the Administrative Director for the UMass Jazz in July Summer Music Programs, teaches at Amherst College and Mt. Holyoke College and contributes to the production, performance and educational programs at the HCC Jazz Festival, Northampton Jazz Festival, and the Vermont Jazz Center. David has performed or recorded with Karrin Allyson, Chocolate Peach, FlavaEvolution, The Leah Randozzo Group, Evelyn Harris, Chuck Langford, Yusef Lateef, Kevin Mahogany, Rebecca Holtz, Samirah Evans, Charles Neville, Dick Oatts, Arturo O’Farrill, Beau Sasser, Miro Sprague and many others.

Vermont Jazz Center presents the Convergence Quartet with special guest Wanda Houston on Saturday, June 20th at 8:00 PM via live stream. The VJC is especially grateful for sponsorship of this event by the McKenzie Family Charitable Trust whose contribution has made this concert possible.

The VJC is also grateful for the ongoing support from the Vermont Arts Council and the National Endowment for the Arts.  The VJC is also thankful to web technician Johnny DiGeorge of Good Bear Productions, to videographer Michael Hanish of Free Lunch Media and to Aaron Howe of Europa IT for bringing this production to life. Hospitality for our artists is provided by Holiday Inn Express of Brattleboro.  VJC publicity is underwritten by The Commons, The Brattleboro Reformer, WVPR, WVEW, and NEPR.  Special thank you to Tom Reney of NEPR for his contribution to this event and to jazz as a whole.

There is no charge for the live streamed show of the Convergence Quartet at the Vermont Jazz Center. The ticketed prices of VJC concerts are sliding scale $20-$40. Online listeners are asked to donate generously if they are able to help sustain the production costs of this event.