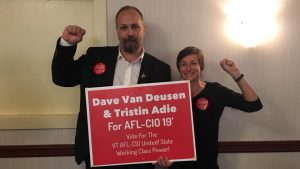 Said Liz Medina of UAW Local 2322 and new District Vice President for Washington/Orange Counties, “I am excited to be part of a rank-and-file slate that has a bold vision for the future of the labor movement.”
Asserting that they are not afraid of strikes, the newly elected members to the AFL-CIO state leadership pledge not to support political candidates in Montpelier who do not fight for union and social-justice interests.

“We had the largest convention in 20 years,” said incoming President David Van Deusen of AFSCME Local 2413. “We will not be afraid to represent the true interests of labor and working Vermonters.”
Close to 100 delegates from around the state came to represent their local unions—triple the number of delegates of many recent conventions. Joined by rank-and-file members, they made this the largest state AFL-CIO annual convention in recent memory.

In addition to support for a Green New Deal, resolutions passed at the convention include solidarity with UE members from Burlington’s City Market who seek a $15-an-hour livable wage.

“Not only does our agenda emphasize social and environmental justice, but those who were just elected also represent diversity in terms of race, gender, age, and union affiliation,” said Sarah Alexander, member of UVM United Academics/AFT and newly elected District Vice President for Chittenden County.

Immediately after yesterday’s convention, the new leadership invited all interested VT AFL-CIO members to attend the first Executive Board meeting whose actions included
• Voting to make all Executive Board meetings open to all VT AFL-CIO members;
• Voting to set aside funds to develop an on-call organizer roster to assist affiliated Unions with new or internal organizing drives;
• Taking steps to form a committee to re-evaluate the state AFL-CIO’s relationship to political parties and its legislative strategies;
• Reaffirming commitment to the United! Ten Point Program for Union Power with an emphasis on democracy, solidarity, organizing, and social justice.

Dwight Brown, member of AFSCME 1343, credited this 10-point platform for the convention’s historic turn-out and interest. “We won, and now the work begins.”

UNION DEMOCRACY!
We shall seek to amend VT AFL-CIO Constitution to allow ALL members an equal vote in electing Union officers. Seek to involve the rank & file in collective decision making.

WORKING CLASS UNITY!
We oppose fascism and discrimination in all its forms. We are strong when we are united as Union members and as one working class.

OUR SOCIAL PROGRAM!
We believe that if you work 40 hours a week, you should not have to struggle to pay your bills and make ends meet. We will fight for an expansion of social programs that benefit all working class people, and we will fight to make sure these programs are paid for through progressive taxation (and not having new burdens placed on working people).

POPULAR FRONT!
We will seek coordinate on social and political efforts with allied Unions outside the AFL-CIO and with community organizations when and where those Unions and organizations interests reflect our own. We recognize that we, as a people, are stronger together than apart.

GREEN NEW DEAL!
We support investment in our public infrastructure that results in a healthy environment. We assert that all such projects involving public money must guarantee prevailing wages, good benefits, and that Union labor is utilized.

ELECTORAL POLITICS!
We will NOT support candidates that do not actively support us; we do not care what party they are affiliated with. We recognize that the politicians in Montpelier have not been representing our Union interests. We will therefore explore new, more effective ways to approach electoral politics.

WORKING CLASS DEMOCRACY!
We assert that working people, as the majority, should have a direct vote and say concerning the priorities and laws of the land. We therefore will fight to implement a Town Meeting based referendum system of government.

PRIORITY ON ORGANIZING NEW SHOPS!
We know that by Unionizing new shops, we grow our Union power. We shall therefore dedicate real resources to organizing, and these resources shall support the organizing efforts of affiliated Unions.

WE ARE NOT AFRAID OF STRIKES!
We unequivocally assert that without our labor, Vermont cannot work. Therefore, one of the most powerful tools at our disposal is the withholding of our labor. When strikes occur, we shall provide support to striking workers. During contract negotiations of affiliated Unions, we shall also provide assistance by way of model contract language which, when implemented, helps build a stronger Labor Movement.

BUILDING A MORE POWERFUL LABOR MOVEMENT!
We stand with those Union members that stand with us. We further recognize moving a progressive working class program forward will take not only the participation of AFL-CIO Unions, but also that of the NEA, VSEA, UE, and other non-AFL-CIO Unions. We therefore invite like-minded members from within those Unions to adopt this 10 point program, to join us, and to seek to implement this program in every Union in Vermont. We further recognize that it is not enough to capture the leadership of Unions; to win, we will also require rank & file engagement and action. Thus we will work to increase the involvement of the rank & file at every level.