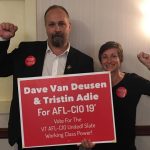 Said Liz Medina of UAW Local 2322 and new District Vice President for Washington/Orange Counties, “I am excited to be part of a rank-and-file slate that has a bold vision for the future of the labor movement.”
Asserting that they are not afraid of strikes, the newly elected members to the AFL-CIO state leadership pledge not to support political candidates in Montpelier who do not fight for union and social-justice interests.