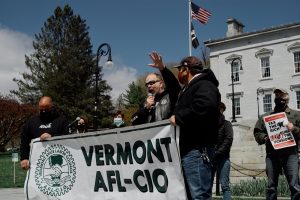 Trumka and the Vermont AFL-CIO have been engaged in a protracted conflict over much of 2021 as a result of ourselves not abiding by his demand that we refrain from conducting a General Strike Authorization Vote at our Convention in November, 2020. We did in fact take that vote and it was passed with the support of 87% of our seated delegates. Through this rank & file action, our elected Executive Board was empowered to call for a Vermont General Strike in the event of a neo-fascist Trump coup. I should not have to remind anyone about the unstable political situation in November of last year; Trump had armed fascists standing by, he was filing with courts to have legal votes thrown out, and he was actively seeking to manipulate the appointment of persons to the Electoral College. Further, the January 6 insurrection clearly and irrefutably demonstrates that our concerns were well founded. And while there was a transfer of power on January 20th (and thus we did not ultimately call for the strike) the Vermont AFL-CIO knows that taking that vote and preparing for a mass work stoppage was the historically right thing to do. As I have said before, we make no apologies.

Since Trumka and the National AFL-CIO began the politically motivated campaign against us (March, 2021), ten pro-Union progressive organizations from around the world drafted or signed a public letter in support of us demanding Trumka back off. So too did scores of New Left leaders from the 60s/70s. And myself and other Vermont AFL-CIO leaders have talked openly and freely with the press about our struggle and how this conflict highlights the need to not only make democratic change within the National AFL-CIO, but also why we need to turn in a more progressive rank & file driven direction utilizing social justice Unionism as our strategic approach. And further, allied National AFL-CIO leaders such as Sara Nelson (CWA) and Mark Dimondstein (APWU) stated their support for us and the new direction we seek to articulate. Together, these many factors and acts of solidarity undoubtedly lead the National AFL-CIO to recognize that there was and is a price to pay if one is to pull the trigger against Union members daring to stand up for our democratic rights. And in the end, we won.

So now, as we put this conflict behind us, know that the Vermont AFL-CIO remains committed to building the kind of Labor Movement we will need to effectively overcome the next crisis in our democracy, and in fact go on the offensive to achieve MORE democracy for working people, to win on social issues that uplift working families, to secure more and improved Union rights, and to begin to give form to a more equitable and more free society. And further, the Vermont AFL-CIO recommits itself to working within the National AFL-CIO to make democratic change from within in order to re-make our Labor federation into a truly progressive force capable of changing what is politically possible in the United States and beyond. And here, to every extent possible, we shall seek to be in solidarity with all our AFL-CIO brothers and sisters.

Finally, as President of the Vermont AFL-CIO, I would once again like to thank everyone that stood by us during this hard fight. I also congratulate the 11,000 members of the Vermont AFL-CIO and the entire elected Executive Board and Presidential Advisory Committee for staying united and doing the right thing when it had to be done. UNITED WE ARE UNION STRONG!