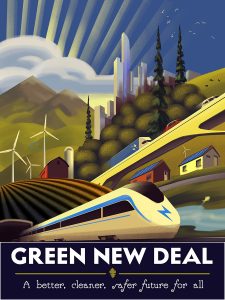 *Now Is The Time To Empower Working People!
*Fight For A New Social Contract!
*Support A Green New Deal!

Cabot, Vermont, 6/15/21 – With over 80% of Vermonters having received at least one dose of the COVID-19 vaccine, and nearly 72% of us fully vaccinated, today [6/15/21] the Governor declared an end to the State of Emergency and the termination of pandemic related social restrictions. It is significant that Vermont is the first U.S. State to reach an 80% vaccinated rate. It is also significant that throughout the pandemic Vermont suffered only 24,339 known COVID infections and 256 total deaths; both our infection and mortality rate were the least in the Nation compared to the 49 other States. And while even a single death is a regrettable tragedy, stacked against Alabama’s half a million plus cases and 11,000 (and counting) fatalities, it’s clear that we fared better than most. And while we are not out of the woods yet, we have also emerged with the 5th lowest unemployment rate in the Nation at 2.9% (Texas by comparison is at 6.7% while Florida is at 4.8%).

How did we do this? Well, while much of the South and other parts of the country fretted about masks being an infringement of civil liberties and the vaccine being part of some insane conspiracy, Most Vermonters from the get go cared about their communities, abided by social distancing, wore masks (even before any mandates came into effect), and worked collaboratively in making our society resilient in the face of hardship.

When the lockdown went into effect in March 2020, the State started down a path which rapidly expanded access to unemployment, imposed a moratorium on evictions, restricted utility shut-offs, organized free childcare for essential workers, made sure that free meals were provided to all kids, guaranteed folks would be able to receive basic COVID related healthcare, 10,000s of essential workers (including undocumented farm workers) received hazard pay, and even while restricting or halting indoor gatherings/business, Vermont loosened regulations on outdoor economic activities. These steps, combined with effective social contact tracing & implementation of policy based on science, along with the Federal paid sick leave, paid family medical leave, and increased unemployment benefits, went a long way in creating an environment whereby we were able to exponentially reduce the harm threatening our people. As President of the Vermont AFL-CIO, I am proud that our State Labor Council vocally supported these reasonable steps during those dark times.

This is not to say this was a utopian experience, and this is not to say that too many workers weren’t unduly put in harm’s way in certain Towns and by certain employers and in certain industries. The truth is that many were. But in numerous cases, even where the employer failed to take proactive steps to keep workers safe, Union Stewards, like in the City of Newport, stepped up to implement their own health & safety protocols. And in countless other shops Union leaders sat down with management to make sure workers had adequate PPE and that everything possible was done to keep people healthy. But that, of course, was in shops that have a Union. The situation was much more dire in select places of employment and Towns where there was and is no Union and where the bosses refused to accommodate the health concerns of workers. And while there are certainly harrowing tales to be told about the irresponsible actions of some employers, the story as a whole is one where we, as a people, did well. And our expanded social safety net managed to keep our communities intact despite it all.

But here is the thing… Without further action, the steps taken to strengthen the social safety net during the pandemic are fleeting… Of the many temporary social benefits that were put in place, the only lasting legacies (so far) will be universal mail in voting for General Elections, and an almost insulting $25 extra a week in unemployment for having a dependent child. And conversely, as the pandemic subsides, those workers who received livable wages through hazard pay will fall back into economic insecurity. Evictions and homelessness will again rise. Mandatory paid sick days will fall back to their pre-COVID rates. Paid family medical leave shall remain an aspiration. Utilities will be shut off. Healthcare, for other deadly diseases, will remain a privilege and not a right. Childcare will remain unaffordable for many. Child hunger will return as the free meals wind down. And unorganized workers will still face an unfair and uphill battle when they seek to form a Union.

Even so, the pandemic has shown us two things. First, Vermonters do stand together when facing a perceived crisis. At our core, we care about each other. And second, when there is a sense of urgency, when we can hear the wolf knocking at our front door, it is both possible and desirable to rapidly build a social safety net capable of delivering security to our communities and working families. And if we can do it in a matter of days, weeks, and months, during a State of Emergency, we can do it everyday, for everyone, everywhere. And here let us not lose sight of the fact that for low income people, for the sick, for those that live paycheck to paycheck, the wolf was already at the door long before COVID-19. And as we have just seen, it does not have to be this way..

So while we rightly celebrate the coming out of the darkness that was the Coronacrisis, let us also demand a continuous progression forward towards the common good. Let us require a future whereby the core benefits provided during the pandemic (livable wages, expanded unemployment, access to healthcare, increased paid sick leave, paid family medical leave, free childcare, free meals for every child) become a permanent fixture of our social fabric. And let us go a step further, not only creating a more fair and democratic path by which workers can form a Labor Union (i.e. Card Check), but let us also reinvigorate our economy through public investment in infrastructure, affordable housing, retrofitting existing homes, and building renewable energy plants (all with Union labor). In a word, it’s time for us to embrace a new social contract and a Green New Deal.