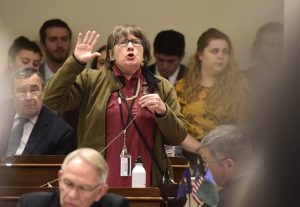 I would challenge anyone to find a single instance were VT Representative Cynthia Browning voted in favor of any piece of major legislation that benefited Vermont workers or was supported by Organized Labor. And this week she challenged the quorum of the House thereby compelling 100 lawmakers to converge on the Statehouse, despite the rapid spreading virus, in order to enact emergency voting procedures desired on a tri-partisan bases during the crisis. The Vermont AFL-CIO celebrates Browning’s removal from the powerful Ways And Means Committee and encourages Speaker Mitzi Johnson to not appoint her to any committee. We further call on the Vermont Democratic Party to continuously reject Browning as a recognized member of their Party and thereby refuse access to their Party lists, endorsements, and assistance during the November General Election. And frankly, the Vermont AFL-CIO asserts that such actions should have been taken years ago.

Browning, of Arlington, will be replaced on the Ways And Means Committee by Democrat/Progressive State Representative Emilie Kornheiser. Kornheiser, from Brattleboro, is a member of the Workers Caucus and is a reliable friend of working people & Organized Labor.

The fact is the VT Democratic Party platform calls for support of working Vermonters and Unions. Party leadership has, at times, set priorities which aim at achieving livable wages and paid family medical leave for all. Yet Browning voted against the compromised family leave bill (which failed the override effort by ONE single vote), and she voted against the modest dignified wage bill of $12.55 an hour (which passed and became law). And further, any chance Browning has had to vote against a pro-worker, pro-Union bill she has gleefully done just that. Put simply, she is a political enemy of Unions and working families.

Therefore, the Vermont AFL-CIO stands with the VT House leadership concerning their decision to remove Browning from her committee assignment. And we call on the VT Democratic Party to take further, stronger action in completely severing her from any and all relationships to the Party. And finally, we would embrace similar action being taken against any lawmakers (from political Parties that claim to stand with Labor) who demonstrate such absolute distain for the health and wellbeing of fellow Vermonters, and who likewise refuse to support priority legislation advocated for by the Vermont AFL-CIO and other major Labor Unions.