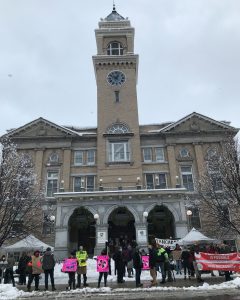 I, like many dozens of other anti-fascists, made my way to Montpelier not knowing what to expect, but mentally and physically prepared come-what-may. Personally, I felt a political and moral responsibility to be there and to never allow armed fascists the ability march on one of our Vermont cities without being opposed and without facing resistance. But after a number of Vermont Republican Party leaders called on their supporters to NOT attend any pro-Trump demonstrations (and instead joining with VT Democratic and Progressive Party legislators in calling for the immediate removal of Trump from office), and after anti-fascists declared that they too would rally in Montpelier, it appears that not one single fascist was ready or willing to show their face in Montpelier today.

This afternoon was a victory for the great majority of Vermonters who hold democracy dear. But the real struggle may just be starting…

What the January 6 fascist insurrection in Washington DC tells us is that even while Trump failed in his reelection bid, he has succeeded in invigorating and legitimizing a growing fascist movement in this country. And these fascists are not restrained by traditional political discourse. They are armed, comfortable with engaging in violence, and support militant actions to further their racist and anti-labor agenda. They are also increasingly well organized.

Over the next four years we must expect that organized armed fascist activity will only increase. They will pose a threat not only to labor leaders, racial justice organizers, & the left, but also to democracy as such.

As this threat from the extreme right grows, we, as Organized Labor, must be prepared to face these dangers ourselves, and without relying on outside forces to keep us safe. We must put in place formations and systems capable of mitigating these dangers, and we must not let our guard down.

Fascism thrives on division, hatred, and fear. It grows when left unchecked and unchallenged in the streets. The liberal mantra that fascists should simply be ignored, and that ‘failure to garner the spotlight will make them melt away’ is both dilutional and cowardly. Fascism does not just go away. It be beaten back. And four years of Trumpism should make clear to all who care to see that fascism is no longer on the fringes, but is now well entrenched within the halls of power.

As Labor we must diminish the space available to fascism. We must build deeper alliances with non-traditional partners from the wider social movements and we must present a progressive counter program for fundamental social change. And of course we must be prepared to directly confront fascists wherever they may seek to rally or organize. And we must never allow the extreme right control of our streets, neighborhoods, or communities. On this we must be united.

They Shall Not Pass!
David Van Deusen