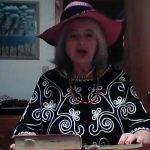 I have been a perennial losing political candidate in Vermont for many years. One year I really thought I saw election fraud. I was watching the votes coming in, and thousands of votes for me were suddenly cut in half. I wrote a blog post about it at the time which may still be wandering the internet somewhere.

I began to think that Vermont was the testing ground for vote fraud. Vermont has a very small population and if you are a losing candidate, and you are not within a certain tiny percent of the winner, then you have no grounds, no legal cause of action to complain, if for example, you came in 4th and should
have come in 3rd.

The legendary “Fat Lady” was Kate Smith who had a wonderful contralto voice.

She sang “God Bless America” at the end of NY Yankee games for years.

Yankee catcher Yogi Berra changed the saying to “It’s not over till it’s over”, which is the situation we’re in right now with the presidential election.

It’s not over until the fat lady sings!

I think she has.

As a fan of third parties – I think this country desperately needs a third or fourth party – I was thrilled to see the number of candidates for president on the Vermont ballot this year. Twenty one possibilities await the registered Vermont voter.

But who are they?

When a criminal is acquitted of crimes, not because of innocence but because the legal system failed to do its job, it means that bad behavior has been rewarded. The U.S. Senate impeachment process (fake trial) has been a display of some of the most rotten aspects of a political and legal system in an advanced state of decay.

The criminal-in-chief will now feel emboldened to run roughshod over the rights of anyone who does not agree with him. He has been given carte blanche license to not have to follow any American laws because he knows that the Senate and his supporters have his back.