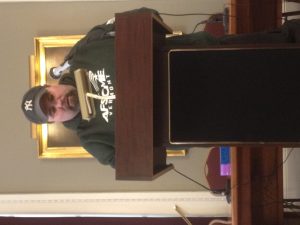 Montpelier, Vermont 4/3/19 -Vermont AFL-CIO Unions including AFSCME, AFT, IBEW, USW, & PFFV, have been fighting all winter to get legislators to advance H.428 & S.36, card check recognition for public sector workers.  The bills were introduced in the House by Progressive Brian Cina, and in the Senate by Democrat/Progressive Phillip Baruth.  If passed, card check would establish that whenever a majority of workers sign a Union card in any given public sector shop, their Union would be immediately recognized.  Despite Labor’s united front on this issue, the Vermont Senate and House (which is overwhelmingly composed of Democrats) has yet to hold hearings on the bills, let alone move them out of committee.

What follows is the full text of the speech, delivered by AFSCME 1343 President, Damion Gilbert, in support of the card check bills:

“Hello, I am Damion Gilbert, President of AFSCME Local 1343 & Executive Board Member for AFSCME Council 93. I work for the City of Burlington’s Department of Public Works.  It is an honor to be here today to speak for my 1800 members and the 7000 Vermont Home Healthcare Providers that our Union represents.  It is also an honor to stand alongside fellow Labor Unions and community allies to demand that ALL working class Vermonters have access to livable wages, paid family medical leave, and especially a fair & democratic recognition process when working people choose to form a Union.

“It is a travesty that many tens of thousands of Vermonters do not presently get paid a livable wage. I sympathize with this and support the effort to rapidly move to a $15 an hour floor for all laboring people.  I say this even though almost all of our AFSCME Union members already have won at least $15 an hour.  In fact this past year we celebrated our Unionized St Mikes Custodians winning a living wage for the first time in their new contract. Even as recently as this past fall, most Custodians were paid slightly more than $12 an hour, with some Custodians making as little as $11 and change. Here they were able to achieve a $15 an hour livable wage (now, and not four years from now) by standing united and engaging in the collective bargaining process which is afforded to them as a Unionized workforce.

“I say this to highlight that economic and social justice is within the immediate reach of working class people when they stand in solidarity with each other through a Labor Union which is theirs.

“But Labor is under attack. It was no mistake that the Supreme Court recently struck down the right of public sector Unions to collect mandatory dues.  It is also no coincidence that the Executive Branch of Government in DC is actively seeking a rule change to outlaw even VOLUNTARY dues-payroll deductions for Home Healthcare Providers.  And of course new appointees to the National Labor Relations Board (NLRB) have worn their anti-Union animus on their sleeve.  In brief, the powerful elite of this country, the wealthy ownership class, are actively trying to break the back of Organized Labor.  But we shall not be broken. As was said in the Spanish Civil War ¡No Pasarán!

“If future historians are not to write that Vermont was party to this betrayal of Labor, political figures in Montpelier cannot remain silent. And given the scope of the existential attacks we are now facing, non-action or the politics of the status quo are no different than collaboration.

“Therefore, AFSCME Vermont is here today to say loud and clear that H.428 & S.36, bills that would establish official Union recognition for any public sector shop wherein a majority of the workers have signed a Union card, is the means to demonstrate that Montpelier, unlike DC, stands with Labor!

“These bills, known as the “card check bills”, circumvent the lengthy, legalistic, and  bureaucratic Labor Board process for recognition that exists today for public employees; and to be clear, the present VLRB process for recognition is weighted to favor anti-Union employers.  When implemented, card check would instead allow working people to more easily and more fairly come together and begin a collective bargaining process when such a Unionization effort is supported by a majority of workers. And here, by making the Unionization process more democratic and fair, it is our expectation that more Vermonters will choose to organize into a Union and will thereby be able to bargain for the social and economic justice that too many of our working families are yet to enjoy.

“H.428 & S.36, card check, is the politically defining issue for AFSCME in 2019. Those politicians that stand with us (and I see many of them here today!) shall be afforded our respect and appreciation.  Those that stand against us, or those that stand aloof shall rightly be viewed by AFSCME as complicit with the attacks presently emanating out of Washington.  One’s party label will have no bearing on who we gage as being with us or against us when it comes time to report back to our members. What will matter is if they supported card check, and if their support was active.

“So again, we invite the leadership of the Vermont House & Senate, all persons elected to this General Assembly, and working Vermonters in general to support H.428 & S.36, card check, and see that these bills move out of committee and put on the desk of the Governor. The time is now.  Thank You & Solidarity!”