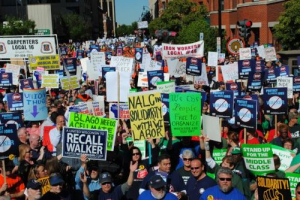 “To labor unions, woman’s groups, racial justice organizations, and pro-union progressives of all stripes, Scott Walker represents the worst of the worst in terms of the wrong direction the extremist-anti-union-right would like to take our country if given the change. Walker believes workers should have NO collective bargaining rights, that our education system should be privatized, that women should not control their own bodies, and that the wealthiest 1% should receive massive tax cuts (at the price decimating our social services). AFSCME-Vermont as well as the major Unions and key community/political organizations in this state are dumbfounded as to why a reactionary figure like Scott Walker would be invited to speak in Vermont,” states David Van Deusen, a Vermont AFL-CIO District Vice President & AFSCME-VT Union Representative.

Damion Gilbert, a City of Burlington worker and President of AFSCME Local 1343 questions, “We are also deeply troubled by the fact that Governor Phil Scott has announced his intention to be there to welcome Scott Walker to our state. Does this signal that Governor Phil Scott is ready to launch attacks on public sector labor unions such as ourselves? If so, we are ready to resist such attacks with every appropriate tool at our disposal. We will resist in our shops, in the streets, and through our unions!”

Tim LaBombard, President of the Vermont Building Trades Council AFL-CIO and of IBEW Local 300 asserts, “Scott Walker’s invitation to Vermont from the state GOP speaks volumes to working Vermonters!! Be assured we will reply to the threat!!”

Kristen Vrancken, an organizer with the Woman’s March Vermont contends, “The Vermont GOP’s welcoming of Scott Walker to our state should alarm all those who support women’s rights, minority rights, LGBTQ rights, immigrant rights and workers’ rights. Women’s March Vermont looks forward to turning out en masse to unwelcome him on 5/30.”

Omar Fernandez, President of APWU-Vermont adds, “Walker says labor is greedy when we want to bargain for a fair days pay for a fair days work. Yet Walker and his kind bend over backwards to give massive tax cuts to the richest 1%.  This is wrong, and postal workers will be on the picket line on May 30th to say so, and to defend collective bargaining rights.”

Vermont’s leading labor unions and community organizations welcome all pro-labor Vermonters to join them in Burlington on the picket lines on May 30. Picketers will meet at Battery Park at 5:00pm and will march to the Hilton Hotel at 5:30pm.  The picket will run until 7:15pm.

RSVP by going to the Vermont AFL-CIO Facebook page.