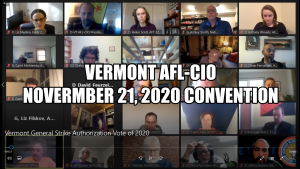 The discussion captured in this film document the concerns of Union members, Labor leaders, and allied political figures (such as State Reps a and City Councilors from Vermont’s largest city of Burlington) as they considered the crisis the nation was facing. The film also highlights how the Vermont AFL-CIO was able to approach these serious and historic questions of how to build a more impactful resistance (should such resistance become necessary) through a thoroughly democratic and transparent process conducted according to the Constitutions of the Vermont AFL-CIO, the National AFL-CIO, and guided our Town Meeting tradition.

In the end, 87% of the assembled Union Delegates (and 92% of total Convention participants) voted to authorize the Vermont AFL-CIO Executive Board to call for a VT General Strike should there not be a transfer of power from neo-fascist Republican Donald Trump to Democrat Joe Biden on January 20, 2021.
While Trump, who is yet to meaningfully concede defeat, was forced from office on Inauguration Day, the fascist insurrection on January 6th, 2021, and other attempts by the Trump Administration to cling to power, clearly and unambiguously demonstrate that the concerns articulated by Vermont AFL-CIO members on November 21 were well founded. And while it did not become necessary to call for the General Strike, perhaps we came close during the January 6th insurrection. If the insurrection was successful in stopping the Electoral College vote (and thus the ultimate certification of the election results) the political situation would have been dire and action, by Organized Labor, would have been required.

Trump was removed from office, but it did not have to fall the way it did. If the scales tipped a little more to one side, the outcome could have been gravely different. And here the Vermont AFL-CIO, by taking this stance on a General Strike, was on the right side of history (and we will be so again if core aspects of our democracy come under threat in the future).

In conclusion, there are those that claim to be the friend of the working people who are not comfortable when Locals and State Labor Councils contemplate action beyond the direction of Washington DC. There are those that are more comfortable with the limited and played out game of making friends with a few high ranking members of the Democratic Party in Washington as a strategy in and of itself. These people may say that they stand with the rank & file Union members and working class, but it is just such a limited political approach which led us to the brink of a reactionary coup in the first place and a declining national Unionization rate that hovers around 10%. And further, when the voices of the status quo seek to stifle concerted action by workers, when their power is used to shut down the democratic processes and expressions of working people, then they, despite their rhetoric to the contrary, become an obstacle to be overcome (and not a voice of leadership). And as we, Organized Labor, seek to defend democracy as such, and as we seek to grow our collective social & political power well beyond the limitations of the present, we must look to our own solidarity and the engagement of the many as our only chance at salvation. True UNION POWER does not grow from the relationships of lobbyists, and democracy does not defend itself. But when we are UNITED and when we are prepared to take principled collective action to advance our UNION agenda and to defend those gains we have already secured, we are the agents of our own change.

The following is a link to the Vermont AFL-CIO’s platform; Ten Point Program For Union Power (known also as “The Little Green Book”): https://vt.aflcio.org/news/vermont-afl-cio-ten-point-program

The full text of the Vermont General Strike Authorization Resolution adopted on November 21, 2020:

WHEREAS, the Vermont AFL-CIO and our affiliates are committed to the defense of democratic rights and the institutions of democracy, regardless of the party affiliations of those in power;

WHEREAS, the Vermont AFL-CIO recognizes that democracy in the United States is hobbled by the archaic structure of the Electoral College and entrenchment of the two-party system;

WHEREAS, President Donald Trump and Vice President Mike Pence have refused to acknowledge the results of the election in multiple key states and continue to mount frivolous lawsuits and various political interventions in a baseless attempt to overturn the November 3rd results;

WHEREAS, President Trump has refused, on multiple occasions, to denounce the activities of white supremacist militias and organizations that have stated desires to overthrow American democracy and instead has conveyed support for their actions;

WHEREAS, the Trump administration and Republican allies have conducted a concerted campaign to obstruct, sabotage, and reject a fair and complete count of presidential ballots by creating barriers to voting, targeted at people of color, immigrants, women, and young people. These tactics include intimidation of BIPOC voters at polling places and requirements to have two people sign a ballot that hurt women voters, as well as dismantling key infrastructure such as the U.S. Postal Service;

WHEREAS, the Constitution requires voting results and Electoral College tallies to be completed and submitted to Congress by the first Monday after the second Wednesday in December, and the new 2021 Congress to validate the results, and voters should be determining the results, not courts;

WHEREAS, Trump has denied science, resulting in more than 250,000 Americans dying from COVID-19, and millions more facing deep economic pain due to ongoing impact from the virus, and can do irreparable harm during a lame-duck session;

WHEREAS, the extreme risk currently posed to the historic institutions of democracy in our nation may require more widespread and vigorous resistance than at any time in recent history;

WHEREAS, the labor movement and trade unions have played a proud and vital role in protecting democracy and opposing authoritarianism in many nations throughout the world;

WHEREAS, the most powerful tool of the labor movement in our history has been the power of the general strike;

THEREFORE BE IT RESOLVED that the Vermont AFL-CIO is empowered by the delegates at the 2020 state convention to call for a general strike of all working people in our state in the event that Donald Trump refuses to concede the office of President of the United States.

BE IT FURTHER RESOLVED that the Vermont AFL-CIO will work with allies in the antiracist, environmental justice, feminist, LGBTQ+, immigrant rights, and disability rights movements to protect our democracy, the Constitution, the law, and our nation’s democratic traditions;

BE IT FURTHER RESOLVED that the Vermont AFL-CIO will call on city and county governments to pledge to protect protesters defending democracy, and commit to not using police action or curfews to curtail these activities, and to use all available resources to stand up against any effort by the Trump administration to steal the presidential election.

BE IT FURTHER RESOLVED that the Vermont AFL-CIO commits itself to the long-term goal of winning genuine democracy through the abolition of the Electoral College and two-party system, through the collective action of our affiliates and allied organizations.

*Adopted by the seated Delegates at the November 21, 2020 Vermont AFL-CIO Convention