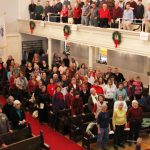 Brattleboro, Vt. – Friends of Music at Guilford (FOMAG) invites singers and music lovers in the Tri-State region to start their holiday season at 1:00 p.m. on Saturday, December 1, with the 48th annual Community Messiah Sing, a benefit for the homeless. Centre Congregational Church, at 193 Main Street in Brattleboro, has been home for the Sing since 1982 and for a few prior seasons as well.

Kenneth Olsson, conducting the Sing for a second season, is well known in the region as a performer in opera and musical theater productions as well as pianist, organist, and choral conductor. He has led FOMAG’s season-opening Guilford Festival Orchestra concerts since 2012 and in 2014 co-founded the Southern Vermont Lyric Theatre. 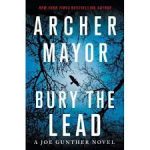 Books will be available for purchasing and for autographs. 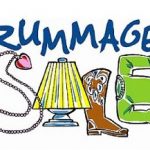 There will be a benefit rummage and tag sale on Saturday, Oct. 20th, from 9 a.m. to noon at the Dummerston Community Center, 150 West St. Items for sale include clothing, fabrics, sewing machine, sewing accessories, kitchen ware, glassware, footwear, costumes and wigs, toys and games, wedding gown, bedding and so much more, filling two rooms. Some items priced, some by donation. 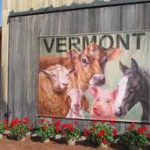 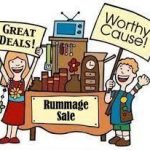 There will be a benefit rummage and tag sale on Saturday, June 30th, from 9-noon at the Dummerston Community Center, located at 150 West Street. Items for sale include furniture, furnishings, kitchenware, footwear, books, toys, games, clothing and many miscellaneous items, two rooms full. Some items priced, some by donation. Money donations from the sale will benefit the Center’s operating and maintenance cost.

This coming Saturday, June 16, the Village Dance Series is hosting a benefit contra dance for the Brattleboro Area Skatepark project (BASIC). Peter Amidon will call and the music is by “Hidden Drive” – Arthur Davis on piano, Laurie Indenbaum on fiddle and Andy Davids on accordion. The skatepark is VERY CLOSE to being able to build at Memorial Park in Brattleboro.