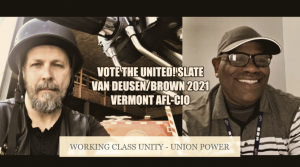 • We have presided over a State Labor Council that has increased membership among affiliates (thereby bucking the national trend of decline), and have signed Solidarity Charters with two Carpenter Local and one SEIU Local.

• We have worked with social movements and allied organizations such as Migrant Justice, Black Perspective, and 350 Vermont in order to move in the direction of a Popular Front whereby our collective power can be amplified.

• We have fought for a Union led Green New Deal.

• We have supported the Vermont expansion of social benefits and livable wages for all workers (minimum wage increases to $12.55 an hour on 1/1/2022), and supported passage of pro-Union bills in Montpelier such as Card Check (in committee) & Worker Classification Enforcement (passed), and we have advocated for a Vermont where we practice a more direct democracy through our Town Meetings.

• We have been vocal supporters of the Federal PRO Act.

• We have built more rank & file democracy within the State Labor Council (more than doubling Convention Delegates per Local affiliates and greatly expanding the size of the elected Executive Board);

• We have supported the formation of progressive caucuses within non-AFL-CIO Unions such as the VSEA (Vermont State Workers United!) and VT NEA (School Workers Action Committee).

• We have built up our cash reserves from nearly zero when we took office, to tens-of-thousands of dollars of cash-on-hand.

• We have helped advance passage of Building Trades supported Responsible Contractor Ordinances in Montpelier (passed) and Burlington (in committee), and successfully struggled for prevailing wage requirements on the CityPlace project.

• We fought for the interests of the working class during the darkest hours of the COVID-19 pandemic, supporting the State moratorium on evictions (passed), expansion of unemployment insurance eligibility (passed), and hazard pay for thousands of essential workers (passed).

• We have taken Union resources out of lobbying and put them towards organizing (hiring on-call organizers).

• We have walked back previous blind support of a Democratic Party that does not adequately support us.

• We have reached out to progressive AFL-CIO affiliates across the U.S. in order to start a discussion aimed at the formation of a nationwide progressive caucus within the National AFL-CIO tasked with transforming the Labor Movement and supporting the work of progressive leaders such as Sara Nelson (CWA).

• We have taken principled domestic and international stances such as stating our unequivocal support for the Black Lives Matter movement, our support for the struggle of Kurdish led YPG/YPJ in Rojava (Syria), against the continuing occupation of Palestine, and against the U.S. embargo on Cuba.

• And together we prepared to defend our democracy in the event of a neo-fascist coup in 2020-2021 by having our rank & file vote to authorize the elected Executive Board to call for a General Strike if there was not a transfer of power in Washington DC on January 20, 2021 (as the U.S. Constitution required).

We have done all this forcefully, with no apologies, and where needed we were unafraid of standing up to those giants within the status quo who fear a more assertive, more militant, and more rank & file driven Labor Movement. But if we are to build the kind of Labor Movement capable to transforming society, of changing what is politically possible in Vermont and beyond, we now need you to give us a mandate to continue the work we have already begun. And to achieve this, we ask you to support the ENTIRE United! slate in the elections for Vermont AFL-CIO officers, at our Convention, on September 18 & 19 at Jay Peak, Northeast Kingdom.

If you are already a registered Convention Delegate, support the United! slate. If you are not a Delegate but you are a VT AFL-CIO Union member, tell your Local President, Stewards, and Delegates to support United!. If your Local has not yet registered Delegates for the Convention, ask your Local President to do so TODAY by contacting our VT AFL-CIO Executive Director, Liz Medina, via email at: vslcaflcio@gmail.com. If you are not an AFL-CIO member, talk with your family, friends, and neighbors who are and tell them YOU support United! and that now is the time for Organized Labor to be bold and to stand up for Vermont’s working class!

UNITED there is no force stronger than Labor. Together, we can and will build WORKING CLASS UNITY and UNION POWER!

Click on the following link to read the Platform of the Vermont AFL-CIO as adopted through the leadership of the United! slate (Ten Point Program For Union Power): https://vt.aflcio.org/news/vermont-afl-cio-ten-point-program