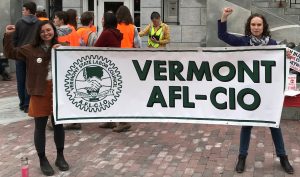 * Free Childcare: Established free daycare for children of essential workers throughout the State;

* Utilities: Gained a moratorium on utility cut-offs during the crisis;

* Medical Treatment: Mandated that tests and treatment for Coronavirus include no out-of-pocket costs;

* Paid Sick Days: Legislated 10 days of paid additional sick leave if you are infected or exposed to the virus (Federal action);

* Paid Family Leave: Required paid Family Medical Leave if you need to care for your child due to a school of daycare closing (Federal action);

This is a good start. BUT WE MUST GO MUCH FURTHER!

The Vermont AFL-CIO therefore calls on the State of Vermont to immediately enact the following:

* Support For Medical & Essential Workers: That all medical workers and essential employees be provided personal protective gear such as masks & gloves and that VOSHA be tasked with strictly monitoring essential workplaces to better guarantee safe working conditions for all that must continue with their labor;

* Labor Coordinating Council: That the Governor to form/work with a Labor Coordinating Council composed of representatives of the leading Labor Unions, especially those representing workers in our healthcare facilities (AFT & UNAP), schools (NEA & AFSCME), department of public works (AFSCME, IBEW, USW, & VSEA), food distribution networks (UFCW & UE), and other sectors that are foundational to the functioning of society, in order to formulate action steps and policy relevant to combating the health & economic crisis;

* No Evictions: That a Statewide moratorium on evictions and foreclosures be imposed for the length of the crisis;

• Home Heating Fuel: That heating fuel for any workers who lack a universal base income be paid for by the State;

* No Unneeded Deaths: ALL high risk workers (as defined by the U.S. Center for Disease Control) be ordered home from work with FULL PAY and without the need to draw down any leave accruals they may have. This directive must include workers from all sectors, including those considered essential;

* Crisis Pay: That all “essential workers” in the public and private actor receive additional crisis pay in the form of cash payments for their public service during the crisis. This crisis pay must occur either through the State of Vermont or through a statewide mandate upon employers;

* Solidarity With All: That any and all crisis-related social benefits be afforded to ALL working people in Vermont, including undocumented migrant farm workers;

* Civil Liberties: That efforts aimed at combating the virus not be done in such a manner whereby the civil liberties and democratic rights of Vermonters are threatened in the name of expedience. Here we must collectively recognize that our strength lies in our common solidarity not in repression.

On the Federal level, the Vermont AFL-CIO calls on Vermont’s Congressional Delegation to:

* Nationalization of Industries: Require that any use of taxpayer money to bail out various sectors also require that said sectors become publicly owned. And that such nationalized industries remain publicly owned after said sectors become solvent and that they then be tasked with serving the public good (and not capitalist profit for the few). And finally, that long term revenue generated from these nationalized sectors be used to support a more robust social system throughout the United States of America;

The Vermont AFL-CIO also is understands that while our attention remains focused on the public health crisis, we must soon consider far reaching steps aimed at rebuilding an economy which is already in crisis. And as the Coronacrisis has laid bare for all to see that the old system of half measures and profit uber alis is not good enough. In fact the failures we are witnessing across the country today speak to the acute need for a NEW SOCIAL CONTRACT. Therefore we REQUIRE that the post-virus rebuilding effort on the State (and Federal) level needs to be done through a progressively funded Green New Deal. The Vermont AFL-CIO is prepared to work with all individuals, parties, and organizations who share our vision of the Green New Deal. However, let it be known that we shall resist any and all who seek to use the crisis as an excuse to impose austerity, cuts to social programs, further privatization, or roll backs to our democratic rights.

The Green New Deal we envision MUST include:

* Tax The Rich: Progressive taxation on the wealthy & corporations to fund this far reaching social project;

* Good Jobs: That ALL projects involving even of penny of public money or tax breaks require that workers be paid, at minimum, the state prevailing wage (factoring in benefits);

* No Layoffs: That no employers seeking or receiving State aid be allowed to dip below the employment levels in effect prior to the Coronacrisis;

* Union Yes: That all private companies that do even a penny of business with the State of Vermont be required to attain a Labor Progress Agreement (LPA) with a recognized union as a condition of them working for the State. Such a LPA must, among other things, require a card check union recognition process if their workers so choose to form a union;

* Livable Wages: That all Vermonters be paid a livable wage of $15 an hour (plus inflation);

* Healthcare As A Human Right: That all Vermonters be provided public healthcare through a single payer system;

* Paid Sick Days: That all working Vermonters have a right to earn a minimum of 14 paid sick days per year;

* Paid FMLA: That all working Vermonters be provided a right to paid family medical leave;

* Childcare: That all Vermonters have access to free or significantly affordable childcare;

* College: Free in state college tuition for all Vermonters:

* Housing: Affordable dignified housing for all;

* Card Check: That all public sector workers in Vermont have the right to organize a union through a card check recognition process;

* Solidarity With All Workers: That these rights be afforded to all Vermonters regardless of their immigration status;

* Direct Participatory Democracy: That THE PEOPLE directly be afforded the ability to advance and defend the social gains made under the Green New Deal by establishing a Town Meeting based referendum system of self government.

In summation, after we overcome the present public health crisis, we must immediately begin to combat the economic crisis that the virus has brought forth. And here all our efforts must seek to create and maintain good family sustaining jobs for every single Vermonter while expanding (and not contracting) our democratic rights!

*The Vermont AFL-CIO has 10,000 members in the Green Mountain State