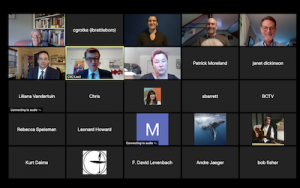 The Brattleboro Selectboard approved an edited version of the community RFP for police review and public safety at their Tuesday meeting. The Town-edited proposal was discussed at length and a few final tweaks were made before it was unanimously approved. Next steps: facilitator proposals and the formation of a committee.

(Tonight I plan to do some very lazy Selectboard coverage. I’m not quite in the mood to transcribe every word for many hours, so I’m going to watch, make note of a few things, and wrap it up by 8 pm, regardless of where they are in the agenda. You are, as always, welcome to add more.)